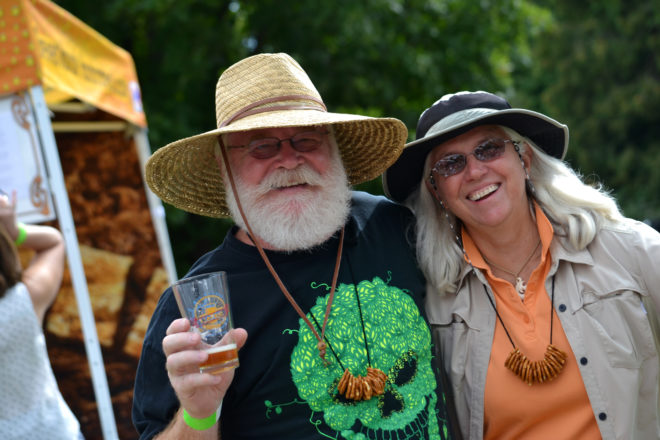 There will be something of a somber feel to the 2017 Egg Harbor AleFest, taking place as it does from noon to 5 pm on Sept. 16 in the shadow of the burned hulk of Shipwrecked, Door County’s oldest extant craft brewery. An electrical fire on Aug. 20 destroyed the popular establishment.

“They’re actually going to be there,” said Jeff Larson, president of the Egg Harbor Business Association, the organization that puts on the fest. “Rick [Zielke], the brewer, is coming. We’ll probably say something during a musical break.”

The music this year will be by Kaleidoscope Eyes, an acoustic Beatles tribute band from Chicago that played in the village in May for the Girlfriends’ Great Eggscape.

“They are very entertaining,” Larson said.

The forecast early in the week was calling for sunny skies and a high of 68, which will be very welcome after the downpour that plagued the 2nd annual Door County Wine Fest in the village in June, keeping the anticipated 3,000 attendees down to a mere 2,000.

“We couldn’t have written a worse script for it,” Larson said, although he noted the wet weather was great for apparel sales.

Larson can be seen at AleFest with a camera in his hand.

“I see so many repeat people. It’s great to see the same faces every year,” he said. “We love to have people come out and share in the revelry, and have a safe and enjoyable time on one of the last summer/first of fall days. It’s a nice time to get together.”

Here’s a look at the VIP beers: