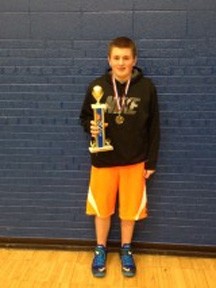 Ryan earned the right to compete at state by winning the Council #4896 free throw shoot at Gibraltar Area Schools, shooting 15 of 15, and shooting 21/25 at the district competition in Algoma. Ryan won the regional at West De Pere with a score of 22/25 and went on to state where he shot 23/25 and tied and had to shoot off. In the first round Ryan shot 4/5 and was still tied but made 4/5 on the next tiebreaker and won. International champions are determined on basis of the best scores from the state competitions submitted in each age category.