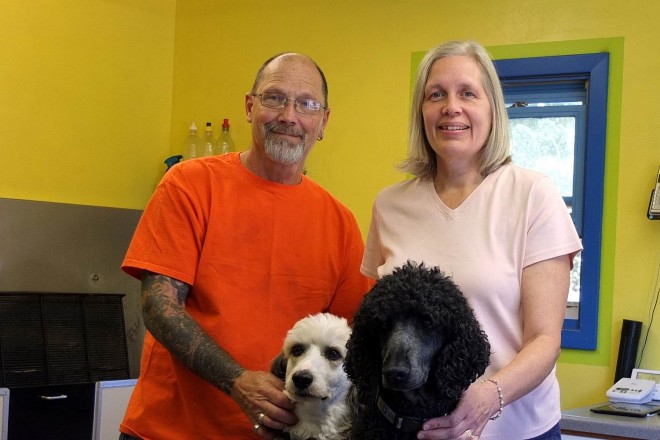 There are lots of pet owners in Door County. It’s a rare day you can drive a mile without seeing a dog out walking its owner. Cats aren’t so much in evidence, but they’re here. A casual chat with a stranger in line at the Pig is as likely to elicit fond comments about Puff or Tiger as about grandchildren. The love people have for their pets fosters businesses to serve them, and two locations on Hwy. 42 have been doing that for a long time.

PetPourri, Ltd., south of Egg Harbor, was started by Kathy and David Franke in 1994. They’d honeymooned in Door County and talked about retiring here. When they were downsized from administrative positions in Boston, they made the move earlier than expected. Because there were no dog groomers in the area near Boston where they lived, Kathy had learned to groom their three dogs herself.

When they moved to Door County, she completed coursework at the Wisconsin School of Professional Pet Grooming in Oconomowoc.

They considered three locations and picked the most viable, the former Granny Norman’s Grocery. The part of the house Granny used as a store has been divided into two rooms – reception/sales and grooming salon. Many of their customers say they came to the store as children.

PetPourri has the capacity to handle eight dogs at a time and Kathy usually grooms about six a day.

The Frankes have two dogs of their own – Max, a full standard poodle, and Bridget, a standard poodle/sheepdog mix. Bridget was one of 60 dogs rescued from a breeding operation in Minnesota. “She’s so smart,” David says, “she could probably keep the books if she wanted to.”

A retired dog groomer, now a PetPourri client, posted this five-star message online: “Thanks for doing a super wonderful job on Sasha! She smells so clean and her coat is so fluffy. We visited the residents at Pinecrest on the way home and everyone thought she shone! I highly recommend PetPourri to anyone looking for an animal groomer.”

The Kazenske family obviously loves cats. Before there was a shelter in Door County, they had accumulated 42 of them (mostly drop-offs) in their barn. Earlier, when they’d lived in the building that is now Villaggios Restaurant, they’d taken over the business on the site, a little sausage and cheese place they enlarged into the Door Country Store and Bakery. When they sold it in 1991 and moved next door into a house that had belonged to Doris Kazenske’s parents, they were still in their early 60s and not really ready for retirement.

On a trip to Asheville, North Carolina, they chanced upon a shop devoted to all things cat. “I’ve always loved cats,” Doris says. “When I was a kid in Chicago, I kept bringing strays in through the front door, and my mom kept putting them out the back.”

And so the second career for Doris and her husband, Al, was the Kitty Korner they opened in their detached garage in 1992. During a snowstorm several years later, they decided it would make more sense to build an attached garage for their car and move the shop into the former garage.

Daughter Kathi Kazenske retired in 2001 after a long career as a paramedic and dispatcher for the Tennessee Highway Patrol and took over Kitty Korner two years later. She has about 30 vendors, mostly in the U.S., and nearly all smaller companies. (“So I don’t have to buy a minimum of 15,000 identical cat toys.”) She also likes to buy handmade items, like the yarn kitties from a lady in Manitowoc and the unique birdhouses shaped like cats from a woman in Brillion. (Imagine a wren perching on the cat’s tongue, ready to hop into its open mouth!)

“What we can’t find, we create ourselves,” Kathi says. During the winter, she and Doris make potholders, aprons, purses, wallets, cat trees, cat toys, jewelry and hats. They also grow and dry their own catnip.

If there’s an item that can be worn, played with or displayed by a cat or its owner, it can surely be found in the two-room shop. In addition to the items produced by Kathi and Doris, there are socks, rugs, art work, Kit Cat clocks, dishes, toys of all kinds, magnets, mugs, statuary and a bit of whimsy saying, “I got a cat for my husband. I think it was a fair trade.”

The shop sells t-shirts, sweatshirts and hoodies for the Door County Humane Society and handmade kitty toys, book bags, purses and totes for Cats Anonymous, a trap/neuter/release agency in Green Bay that serves northeast Wisconsin. Those items are sold tax-free, with all the money going to the nonprofits.

To the Kazenskes’ knowledge, they have the only cat-themed store in Wisconsin. Many of their customers are “destination shoppers” and a great many are repeat visitors.

For years, Kitty Korner’s shop cat was Cinnamon, who slept in the store in a big bowl. She was so well known that when she died of cancer at age 11, it made the front page of a local newspaper with the headline “The Bowl Is Empty.” An online review of the business says, “If you have a cat, like cats, know someone who has a cat or just like cat stuff, this is a must-stop when in Door County. Lots of items for both the cat lover and the cat.”