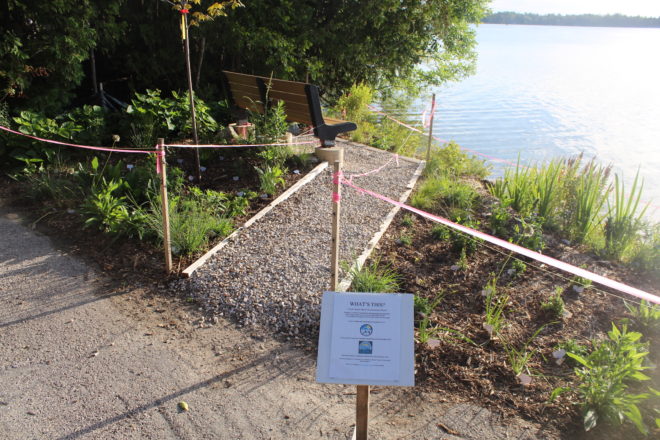 A portion of the shoreline at Clark Lake near the Town of Jacksonport has been restored to prevent further erosion and cultivate native plant species. Photo by Solomon Lindenberg.

Like many other bodies of water, Clark Lake, near the Town of Jacksonport, has experienced elevated water levels during recent years. They are a result of excessive spring rains that have caused erosion and a loss of shoreline along lakeside properties.

In 2019, members of the Clark Lake Advancement Association (CLAA) identified a plot of highly visible public shoreline land at the boat ramp on Townline Road that had been degraded by erosion and overrun with turf grass – and they decided to do something about it.

The CLAA began planning a project in May 2019 to educate shoreline property and business owners about how they could prevent shoreline soil erosion caused by high water levels while abetting native plant species to preserve water quality and enhance wildlife habitat.

Rip-rap is often used to combat erosion by providing a protective barrier for the remaining shore, but according to Marc Weisse, chair of the CLAA’s water-quality committee, this addresses only part of the issue. Weisse said a healthy shoreline should also include soil stabilization and adequate filtration to prevent erosion, runoff and pollution.

Using input from a landscape design firm, a grant from the Lakeshore Natural Resources Partnership and hours of volunteer labor, the CLAA restored the shoreline to display more than 30 species of native grasses, wildflowers and shrubs. The CLAA hopes the small scale of its project will allow owners of lakeshore property to see what they could do on an individual basis as well.

Because the site is technically part of both Jacksonport and the Town of Sevastopol, the CLAA had to receive permission from both municipalities, in addition to obtaining county permits to approve its request to dig and move soil. The DNR also had to approve its plan because of the proximity to the shore.

“It took quite a while to get all that lined up,” Weisse said.

Last fall, volunteer workers covered the area with plastic to smother the existing grass, and once last winter’s snow had completely melted, they began digging and landscaping.

“Then we had to find the native plants, which are frankly hard to procure,” Weisse said.

The group’s members chose native plant species based on the Healthy Lakes & Rivers’ template. Weisse said they tried to source all of their plants locally, but they struggled because the buyer base for the plants isn’t very strong. Volunteers began planting and landscaping in June, and the site is now abundant with approximately 300 plants of 35 different species. Each plant is tagged with a letter and number to correspond with a key for easy identification.

The CLAA also implemented an example of some soft engineering to abate erosion. Volunteers used coir logs, which are spun from coconut-shell fibers, to hold soil in place. As the logs biodegrade over the course of several years, they give native plants a chance to establish a natural protective buffer and secure soil with their intertwined roots.

Volunteers continue to water the area every day unless it rains, and they weed several times weekly. They plan to assess the plantings in the fall and spring to spot plants that require replacing.