It may be the biggest football game in Gibraltar High School’s history. This Saturday, the Vikings will travel to North East Wisconsin (NEW) Lutheran to play for the championship of the state’s 8-man football North Division. Both teams enter the game undefeated this season (eight wins, no losses). Gibraltar is ranked second in the state by maxpreps.com (a national website covering high school sports) while NEW Lutheran is ranked third. 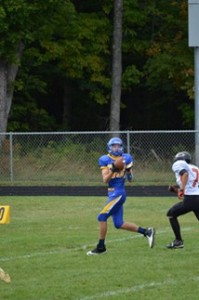 Matt Anderson makes the catch for a touchdown against Oneida Nation at home on Sept. 27. Photo by Alicia Kropuenske.

Quite an accomplishment considering Gibraltar’s coach Pat Keehan confessed that earlier this year he was “skeptical about knowing the [8-man] game.”

“I started doing all the research I could but didn’t find very much information out there, that didn’t come with a charge attached,” Keehan explained.

He did, however, find Chris Fore in California, who had extensive experience with 8-man football. The two coaches exchanged emails, which led to phone calls, and – eventually – Fore sending his playbook to Keehan.

“Last year, when I was coaching 11-man football, we had a playbook of something like 150 plays,” Keehan said. “The playbook we came up with this year, based on what Fore shared with me, is 40 plays. Some of the plays have a few options, but the idea is keeping it simple.

“We have some good athletes and great balance,” he continued, “and our seniors and juniors have really provided leadership for the younger players. We follow the preparation routine for every game and I think that helps us maintain a consistent temperament on the field.

“Our goal, at the beginning of the season was to make the post-season Jamboree. We’ve done that. And know we have the opportunity to do more.”

The Jamboree Keehan referred to takes place on November 2 in Schofield, just south of Wausau. Four games are played beginning with the fourth place team from the North Division facing the fourth place team from the South Division and culminating with the two first place teams from each division squaring off at 7 pm for the Wisconsin 8-Man Football Championship. Prior to this weekend’s game, the worst that Gibraltar can do is to be playing for a statewide third place finish. 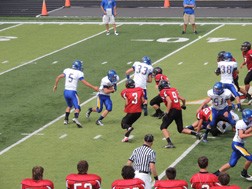 Nick Kita (#5) runs an effective offense during an Aug. 29 game against Luck. The Vikings won 80-44. Photo by Brenda Kita.

Last weekend’s game against Elkhart Lake-Glenbeulah in Fish Creek proved to be more of a challenge than the Vikings had seen this year. Trailing at half-time 20-16, Gibraltar made some adjustments then went out and outscored their opponent 46-6 in the second half.

“The game was a good challenge for us,” Keehan said. “We looked flat and missed some opportunities. We talked about it at half-time and the team responded well in the second half.”

This Saturday’s game promises another challenge. NEW Lutheran is averaging 58 points per game and has allowed just 30 points to be scored against them all season. They are ranked 506 nationally among 1,489 8-man programs tracked on maxpreps.com. Meanwhile the Vikings are 72.8 points per game and have allowed their opponents 134 points in eight games, making them the 307 ranked team on a national level.

Gibraltar will enter the game averaging 205.5 rushing yards per game and 255.4 passing yards per game for a total of 460.9 yards of offense per game – all considerably higher than the national average for 8-man football programs.

Like most 8-man programs, NEW Lutheran has relied on a strong ground attack, averaging 320.9 yards per game rushing and just 58.3 yards per game passing. 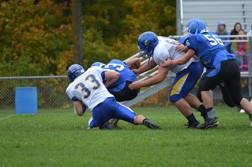 Austin Bauldry with a tackle against Three Lakes on Oct. 5. Photo by Alicia Kropuenske.

“NEW Lutheran has some big kids on their team,” Coach Keehan said. “And playing on their home field will be a big challenge for us. But we will be ready. We just need to keep playing our brand of football and the rest will take care of itself.”

Kick-off is at 1 pm Saturday at NEW Lutheran High School in Green Bay and the Vikings hope to see their section of the bleachers filled with fans as they attempt to complete an undefeated season and earn the chance to play for the state championship in 8-man football at this year’s Jamboree.

Whatever the outcome, however, it has been a remarkable year for program’s first year and the excitement in the Gibraltar School District will be long remembered.