The 3rd of June marks the 274th day, or my ninth month, living in Siberia. I am still digesting the fact that in a little under two months I will be stepping on a plane to go home. Sometimes it’s a sad realization and others, as in the case when the immigration office said I had problems with my registration and had to exit the country the next day (i.e. how I found out I was going to Mongolia), it’s a good thing.

So, due to visa problems, I have been busy exploring the complete opposite side of the world as you know it, the heartland of Asia – Mongolia. I was in Mongolia’s capital, Ulaanbaatar – UB as most people know it – for two weeks. While there I drank the saltiest tea in the world, tried fermented mare’s milk, and was broadcasted on Mongolian National television. I made the most out of my stay there, to say the least. 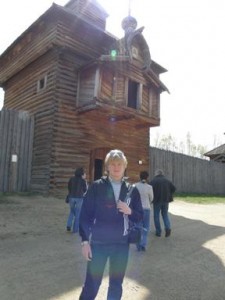 The train ride there is a story in itself. My fellow exchange student, Willow from Canada, and I shared a cabin with two old, smelly, not the brightest, but nice Mongolian men. When we first introduced ourselves to them, their first question was how long we had been married; they of course thought that was the only reason I would be traveling with a girl. Later that night after finding out our ages, 16 and 17, they asked us how many children we had and how long we planned to be married.

That was our first dose of the Mongolian people, and luckily it only got better. What struck me most about Mongolian people was the amount of people who could speak two languages. Most university students speak English without an accent – a large amount of the classes in universities are held in English only. Even the children speak very good English. I gave a presentation to a 6th grade class about the United States, and most of the questions they asked me revolved around the upcoming elections!

The bilinguals are not only in the younger population. Most of middle age to older population speaks Russian. Mongolia and the USSR were very close under communism. I was amazed after going from Russia, were the old Babushkas only know the phrase “Death to capitalists” in English, to Mongolia were I could communicate with practically everybody. I was able to learn an incredible amount about Mongolian history and culture because of this. 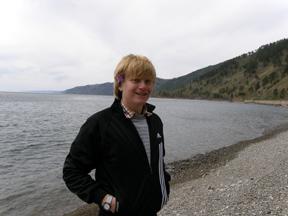 Apart from the people of Mongolia the culture is incredible. You still see people on the street wearing traditional dress dating back to the age of Chinggis Khan. In cities, the very centers are modern apartment buildings but the farther you travel it turns into yurts. Many of the Mongolian people are still nomadic, traveling to a different area every changing season. We went to visit a nomadic grandma, and when we asked her were she was going to live this summer, she lifted her hand and told us somewhere in that direction. She even invited us to come with.

With all Mongolia’s interesting features, I was surprised that more tourists aren’t traveling here. With flights from Japan or South Korea, it is much easier to get to Mongolia than before – flying through my city, Irkustk, in Siberia or taking a train from China. That being said, Mongolia has had a very difficult past. The country depended on the Soviet Union for survival. When communism fell, Mongolia, and many other soviet satellites, had to rebuild from the ground up. In the past 16 years Mongolia has made huge leaps and tourism is tagging along, having quadrupled in the past three years. Tourist camps are springing up everywhere. The main focus, though, is to provide ecotourism. You can ride camels across the Gobi in the South, climb the Altai Mountains in the Northwest, live with a nomadic family, or go fishing on the Mongolian “Baikal” – Lake Hubsugul.

The trip to Mongolia was one I will never forget. I was able to do and experience so much. I met members of the government and past heads of the Mongolian military. I hung out with Mongolian monks. Spoke with famous Mongolian pop singers, and also experienced Khumii – the traditional way of singing by making your vocal cords produce a whistle like sound. I also ate my fill – horse meat with pureed sheep’s tail, traditional salty tea with mutton dumplings, sour milk lollipops and camel milk, among other selections.

However, with two months left, I am starting to reflect on my year in Siberia. It seems to me a dream, sometimes a nightmare, these past nine months. I still remember stepping off the plane and thinking “I have to live here for 10 and a half months!?” That day seems like only yesterday. I feel like I owe my survival to the kindness of the families I have lived with here and my friends who helped me decipher the vodka from drinking water. I have had an incredible time, but I definitely feel ready to return home, who wouldn’t after nine months in Siberia? This place has broken me down completely but built me back up. I relish the day I can present to my friends and family the new person that Siberia has produced. Until that day, never drink the bottled water with the funny writing on it (it is usually vodka), make sure you pick all the hairs out of your camel’s milk, and try putting salt instead of sugar in your tea – that is the Mongolian way.