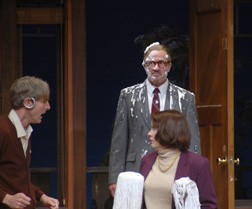 There are few plays that make you squirm in your seat while your laughing at the antics up on stage. The Nerd, a Broadway hit by Larry Shue, currently playing at Peninsula Players, does just that.

The action centers around architect Willum Cubbert, a relatively straight-laced guy who has regaled his friends with one war story in particular: how a man he’s never met, Rick Steadman, saved his life in Vietnam. Things heat up when Rick unexpectedly comes for a visit on Willum’s birthday and the party finds him unbearably awkward, socially inept, and stupidly nerdy. How Willum handles his new visitor – to whom he owes his life – propels the rest of the plot into sidesplitting twists and turns.

Paul Slade Smith captures Willum perfectly and it’s delightful to watch the action unravel around him until he’s at his wit’s end with Rick (brought to life by Sean Fortunato). Willum’s love interest, Tansy, played by Erin Noel Grennan, does her best to temper the madness. Also notable are Willum’s friends Axel, a cynical theatre critic played by Tim Monsion, and Mr. and Mrs. Waldgrave, played by Lee Ernst and Karen Janes Woditsch, who help to bring the hysteria to a new level when they bring their out-of-control son to the birthday party.

As Rick continues to outstay his welcome and create chaos, Willum begins plotting how to make him leave without hurting his feelings. A surprising “twist” at the end of the play keeps Willum from losing his sanity completely – and gives him a new outlook on life.

The Nerd is on stage until July 22. For more information or to purchase tickets call 920.868.3287 or visit http://www.peninsulaplayers.com.