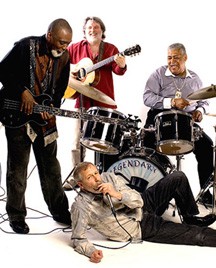 The Harmony by the Bay Concert series at the Martin Park Bandshell in Sturgeon Bay welcomes the Siegel-Schwall Band Aug. 24.

Along with the first-wave British Invasion bands like The Rolling Stones and John Mayall’s Bluesbreakers, The Siegel-Schwall Band was instrumental in the blues revival of the 1960s, serving as the house band at the famed Pepper’s Lounge in Chicago. They earned their spurs backing greats like Muddy Waters, Howlin’ Wolf, Little Walter and Willie Dixon.

From 1966 until they disbanded in 1974, they pioneered the cross-fertilization of the blues with other forms, performing Bill Russo’s “Three Pieces For Blues Band and Symphony Orchestra” in 1968 with the San Francisco Symphony and The Boston Pops.

The band will perform with Door County regular Dorothy Scott, who has flowed between genres achieving popularity in blues, pop, folk and alternative. The common bridge is an exquisite vocal style, amazing guitar playing and a gift for delivering the heart of a song.

The Martin Park Bandshell is located on the Corner of Third Avenue and Oregon Street in Sturgeon Bay. Food and refreshments will be available. Bring lawn chairs or blankets. In case of rain, concerts will move to The Lodge at Leathem Smith at 1640 Memorial Drive.