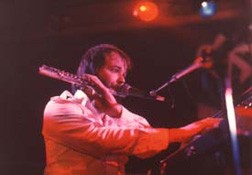 Sigmund Snopek III will perform a special Christmas concert at the Holiday Music Motel in Sturgeon Bay on Dec. 11 beginning at 6 pm.

Early last spring, Holiday Music Motel welcomed famed rock-eccentric Snopek to perform in their on-site concert hall/recording studio. The audience delighted in his uncanny ability to combine virtuosic display and humor into his performance of original compositions ranging from serious art pieces to zany polkas about sausages and baseball. His refreshing spontaneity had the crowd uproariously in laughter as he floated between keyboards, a variety of flutes, harmonium and a 12-foot Alpine horn.

A man obsessed by the Christmas holiday – his entire Milwaukee apartment houses a metropolis of miniature villages complete with working trains, skating rinks and spinning trees – Snopek returns to Holiday Music Motel, this time to spread his joy of Christmas in a concert specific for the holiday season.

This concert will highlight works from his 2002 release, Christmas, where serious renditions of holiday classics like “Little Drummer Boy” and “Coventry Carol” stand juxtaposed to Snopek’s delightful musical lunacy prominent in songs such as “Pumpkin Pie Polka,” “Turk The Turkey” and “Christmas Cookies.”

Before the show, an opening reception will take place at 5:30 pm in the lobby, where concertgoers can mingle prior to show time. Beer and malt-beverages will be available for purchase at the show. Tickets are $10 each and can be reserved by visiting http://www.HolidayMusicMotel.com/tickets or by calling 920.743.5571.