When the FHWA updated its Manual of Uniform Traffic Control Devices (MUTCD) in 2003, it included new regulations for regulatory signs meant to improve safety. The regulations require that all such signs meet new standards for reflectivity, color, and lettering, all meant to make signage easier to read, but all of which will prove costly for state, county, and local governments. 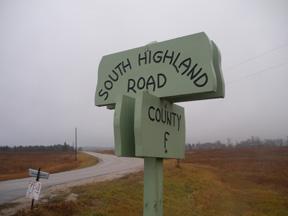 Wooden street signs like this one outside Baileys Harbor will be a thing of the past in 2018.

“Per Wisconsin state law, anyone with roadways available to the public must follow the federal manual,” said Matt Rauch, a state signing engineer with the Wisconsin Department of Transportation.

The FHWA requires that signs such as stop signs and street name signs be made with new retro-reflective materials by 2018. Cities like New York, which will spend $27.6 million to replace its 250,900 street signs, began installing signs meeting the new standards almost immediately, but many towns and villages are only now beginning to consider the changes.

The change doesn’t have a great impact on municipalities that already have aluminum signs. Those simply need to be replaced as they wear out. But in Ephraim and the Town of Gibraltar, meeting the regulations will add significant expense. That’s because the two communities mark many of their streets with wooden signs that will no longer be permitted.

The FHWA made the change to save lives and reduce accidents. The retro-reflective material makes signs reflect much more brightly to drivers at night. Studies revealed that street signs with a capital letter followed by lowercase letters were recognized more quickly than those with all caps, taking driver’s eyes off the road for a shorter time, so signs in all capital letters must be replaced as well.

But in Ephraim, where the community is wed to its unique style, Village Clerk and Administrator Charity Buhr is hopeful they can find a way to work with the DOT to avoid replacing their signs, perhaps by using a reflective paint.

“We’re hoping that the rule changes,” she said. “For us, the big thing is that it adds to the character of our community to have the wooden signs, and we’re doing all we can to maintain that uniqueness.”

Wood signs can simply be re-painted as they age and rarely need replacing, she said. But it’s not likely that the rule will be modified. In 2006, the Town of Brookline in Massachusetts appealed to the FHWA to allow the city to keep its historic street signs, or perhaps repaint them with a reflective paint, but that request was denied. A representative in Congressman Steve Kagen’s office said no town or village officials in the 8th Congressional District had contacted Kagen about the regulation, but that the Congressman would look into it.

Mike Mitterman, Ephraim’s supervisor of buildings and grounds, pointed out that it’s not just the signs that will need replacing, but the post holding the signs as well. A representative from Newman Signs gave a ballpark estimate for the cost to replace a single sign, including brackets and pole at a minimum of $113.85 per sign. Mitterman said he got another quote that put the figure as high as $165.

That figure doesn’t include the labor required to install the replacements. Mitterman said that will likely require drilling into the bedrock below the county’s shallow soil to be sure the sign stays vertical.

In the past, when the village needed to replace a wooden sign, Mitterman stenciled it himself. The village has 95 wooden signs marking its streets, carrying a minimum replacement cost of $10,815, not including shipping or labor costs. Consider the number of wooden and historic street signs in communities across the country, and the new rule could pull untold millions of dollars from municipal coffers.

Rauch said that he is unaware of any federal grant dollars available to offset costs associated with the changes.

John Kolodziej, head of the Door County Highway Department, said the county began moving to the higher standard several years ago as signs wore out. He noted that not all signs are regulatory. Blue visitor information signs are considered informational, as are signs designating historic markers. Those don’t need to meet the new regulations.

While Rauch said there are not MUTCD sign police that will enforce the new standard, there are other repercussions for municipalities that don’t comply.

“It could set up the municipality for liability if there is an accident,” he said.

Aside from improved safety, there is one possible cost savings associated with the new signs. While the old sign material typically lasts about seven years, Rauch said the new retro-reflective coating has proven to last 10 – 12 years.