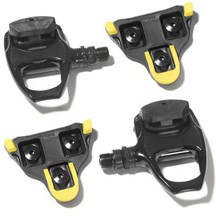 This type of clipless pedal and cleat is primarily used for road cycling.

In cycling, making the move from gym shoes on flat pedals to cycling shoes on clipless pedals is the best budget-friendly shortcut to getting faster on the bike. But at the same time, the transition is daunting to anyone who is not a seasoned cyclist. When deciding to go clipless or not, there are a few things to consider.

The advantages of clipless pedals are in the connection of the foot to the bike. While riding flat pedals, which are the standard on most bikes, the only way to put power into the pedal is by pushing down. The downward part of the pedal stroke uses the quadriceps muscles in the front of the thigh. While the quads are believed to be the strongest muscle in the body, they can still get tired.

Clipless pedals lock your foot into the bike and allow you to pull up on the pedal as well as push down. This engages different muscles to give your quads a break without losing power on the pedal.

For those who are not professional cyclists, a smooth pedal stroke is ideal. While this sounds like a subjective term, it is defined as consistent power (measured in watts) throughout the circular pedal stroke. The force with which you push the pedal down will be equal to the force used to pull the pedal up. This can only be achieved with clipless pedals.

The other advantage in terms of the power of clipless is the concept of float. With flat shoes and flat pedals, your foot will lose some contact with the pedal as it floats up and down along the pedal stroke. When your foot is locked in, any power you push through your foot will transfer directly to the pedal.

Imagine you need to push a heavy box on the ground. The way to generate the most power is to put your hands directly on the box before pushing. Start with your hands one foot away from the box and you will lose power in that space between contact. The same is true for pedals. You want your foot directly on the pedal so that when you push, no power is lost in that space between.

So clipless pedals, which can come in around $100 for both the shoes and the bike pedals, will immediately grant more power and faster times on the bike. It may take a few trial runs in the grass to get used to unlocking your feet without falling over, but once that skill is mastered, you’ve moved another notch up in the world of cycling.