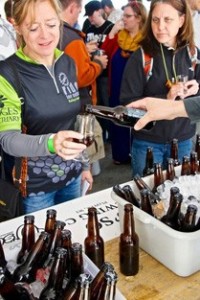 In light of the Peninsula Century Spring Classic conveniently finishing up at the Door County Beer Festival, don’t rule out a deep ale when thinking about your post-ride recovery drink. Beer and fitness are not intuitively connected, but the jury is still out regarding an alternative to Gatorade.

While exercising, our bodies lose electrolytes and water through sweat. We also lose carbohydrates, which are the primary source of energy during workouts, and proteins broken down through the stress of exercise. The goal of recovery is to replace all of these nutrients to get back to full strength as soon as possible.

So liquids are best, as long as they contain some electrolytes, carbohydrates and protein. IPA anyone?

Researchers published in the Journal of Sports Nutrition and Exercise Metabolism took a beer and decreased alcohol volume by 2.3 percent while adding a pinch of salt. Alcohol is understood to dehydrate and inhibit protein synthesis, two things that athletes don’t want after a workout.

The lead researcher stated that this experimental beer gave the same benefits as a sport drink in recovery. The lower alcohol volume, also known as session beers, did not inhibit protein synthesis and the added salt replenished electrolytes. At the same time, most beers are more than 90 percent water, providing all the hydration an athlete needs in a recovery drink. 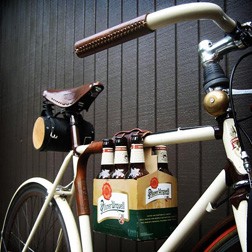 Beer is also a plant-based beverage, containing primarily hops, yeast and barley instead of added sugars and colors of commercial sports drinks.

Unfortunately, the inverted U-curve, stating that more of something is not always better, still applies. The potentially positive effects of post-workout beer tapers off after one glass.

But combined with an extra bottle of water and some good local food, also found at the Door County Beer Festival, recovery should come easy.

Got questions on training, racing or nutrition? Send them to [email protected] and I will answer them in next week’s column.