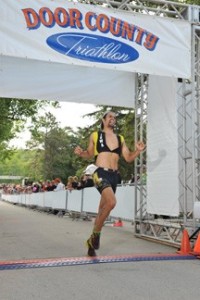 When prioritizing races, the grandiose ones are not always the most important. For me, the Door County Sprint Triathlon this weekend is the pinnacle of my racing year. It’s above the Half-Iron Triathlon the following day and far more important than the first Ironman I’ll be racing in Madison this September.

The Door County Triathlon was the first race I ever competed in and these roads are where I learned how to go fast. I won the Sprint race in 2013 and, since claiming residence in Fish Creek when registering for endurance events, it has become my hometown race. Having spent my first winter in the county, I further injected myself into the silent sports fabric that covers the peninsula.

Last year, I finished the Sprint event seven seconds behind the winner. Although my competitive nature has dwindled in the past several years, I still claim to have lost the race even though I was faster than 999 other people.

When I won in 2013, it came as a bit of a surprise. I was a strong cyclist that could barely swim or run. The following year, I was a well-rounded but less fit athlete, and I came up short.

But the taste of victory in 2013 made me eager for more. Throughout this year, I focused my training on the sprint distance, honing my speed and power more than my ability to go long distances. While this may leave me ill equipped for the Half-Iron distance on Sunday, it catered to my priority of winning the Door County Sprint distance.

In the end, the true reason I’m racing to win is so that I can move on. For years, I have organized my year around the Door County Triathlon. It has forced me to miss other events like the famous RAGBRAI bike ride across Iowa or pass on different runs and bike rides because they would interfere with my training.

How am I supposed to plan a cross-country bike trip when my most important race falls in the middle of the ideal summer season?

In the back of my mind, I think about breaking the sprint course record and immortalizing my name in the Door County Triathlon history book. Perhaps at the turn of next year, the competitive bug will bite me once again and I will chase the record.

But regardless of the finishing time I am hoping for, all anyone can do is race as hard as they can through the finish line. It is impossible to control who shows up on race day and one of the beautiful and frustrating parts of this sport is that, no matter who is there, you can only race against the clock.