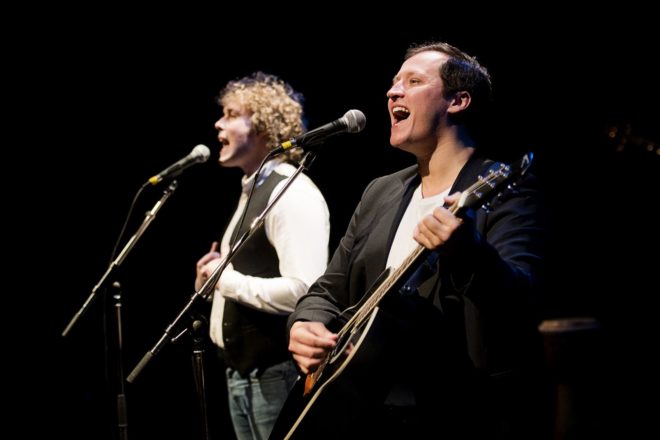 On Oct. 16 at 7 pm, the Door Community Auditorium (DCA) stage will come alive with “The Simon & Garfunkel Story,” a theatrical experience that tells the surprising, compelling story of Paul Simon and Art Garfunkel, presenting all the duo’s biggest hits along the way.

Hundreds of thousands of people worldwide have flocked to see “The Simon & Garfunkel Story,” a critically acclaimed, concert-style theater show about two boys who grew up harmonizing together in Queens, New York. Paul Simon and Art Garfunkel were barely 20 when they became countercultural heroes of the 1960s. Their harmonies would go on to define a generation.

“The Simon & Garfunkel Story” uses state-of-the-art video projection, complex lighting, and a full live band to tell their story. The result is a moving and powerful concert featuring all the duo’s greatest hits, including “Mrs. Robinson,” “Bridge Over Troubled Water,” “Homeward Bound,” “Scarborough Fair,” “The Boxer,” “The Sound Of Silence,” and many more.

The Portsmouth News says, “A must for fans, an education to the uninitiated, this is a tribute show made with true respect for the music – and the audience.”

Tickets range from $32 to $56. Advance reservations are recommended and can be made through the DCA box office, located at 3926 Hwy 42 in Fish Creek. The box office is open 12-5 pm, Monday through Friday. For more information, call 920.868.2728, visit dcauditorium.org or stop by the box office.