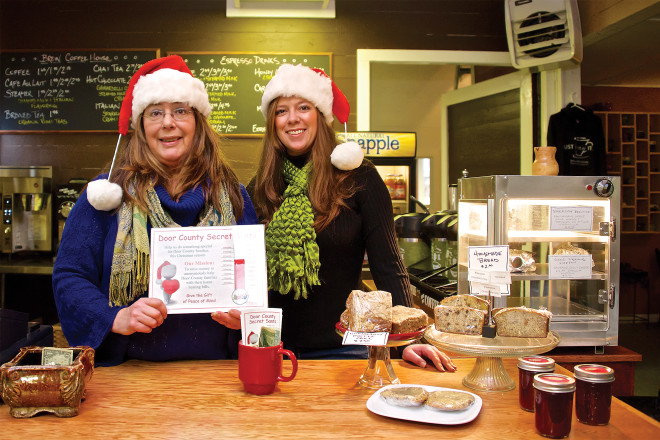 Jane Lee has lived across the United States, from Atlanta, Georgia, to Orange County, California, and places in between, but happily found a home in Door County.

“I started coming up 30 years ago when my parents bought a second home in Ephraim. Like everybody else we tried to figure out a way to make a living up here.

Jane’s daughter Jennifer moved to the county a year later and together they’ve been making a difference in Northern Door with the organization they started in 2011, Door County Secret Santa.

The Lees’ idea to help is simple. Door County Secret Santa is an organization that anonymously helps families pay their heating bills around the holidays. They collect donations, sell “Bloody Merrys” during Olde Ellison Bay Days, and host a trivia night to raise funds. A coffee mug also permanently sits on the counter at Brew Coffeehouse, their coffee shop in Ellison Bay.

That’s the first step. Then, they hear of families in need through word of mouth, churches and schools. They directly pay the heating bill, whether it’s propane, electric or wood, and deliver the receipt to the family’s home on Christmas Eve.

In 2011, the first year, they raised enough money to help one family with a tank of propane; the following year they helped 11 families, and in 2013 their goal was to raise enough to help 20 families.

In Jane’s words, their organization offers, “a piece of mind. We hope that’s how people wake up on Christmas morning, with a little bit of relief.”

Northern Door County has a largely seasonal economy, and come wintertime many people are unemployed, have scattered hours or juggle two or three jobs and still need help paying bills. This is where the Lees saw the need and saw an opportunity to help out where they can, with heating bills.

“It’s not going to fix everyone’s problems, but let’s just take one bill off their mind and provide several months of relief,” said Jane.

Doing good work has always been a part of the Lees’ lives. Jennifer started volunteering at four years old; she tagged along wherever Jane was volunteering. “I licked a lot of envelopes, I know that,” said Jennifer.

Even though the Lees have created an organization that does good work for our community, they are not looking for praise. They emphasize the importance of the community and larger network of people who allow their idea to succeed.

“We want to stress this is not Jennifer and I,” said Jane. “This is a lot of people doing a little bit, or in some cases a lot. We’re really hesitant to use our names – I don’t want to take away from everyone who puts a dollar in the little mug up there. It’s just a lot of people understanding the need.”

When asked about how others can follow their example, the Lees say helping others is not a complicated, convoluted process.

“You have an idea and you put out a mug and you do what you say you’re going to do. It’s that simple. That’s how you start doing a good thing,” said Jennifer.