After closed session at the March 15 Sister Bay village board meeting, the board voted to purchase the quarry property operated by Brandon Small of Door County Custom Stone.

The resolution authorizing the purchase, dated March 15, offers a purchase price of $650,000, which can be borrowed or drawn from other unassigned funds. The village is still negotiating the final price with Small.

“There were some behind-the-scenes discussions that were occurring that we should just buy it and close it,” said Village Board President Dave Lienau, referring to possible solutions after the public outcry at the proposed expansion of the quarry in the fall of 2015. “I think the quarry owners heard loud and clear that the public was not interested in having that quarry expanded. We were able to come to an agreement with them and conclude.”

That conclusion came after a five-year battle in court over citations that the village issued to the quarry for ordinance violations. That suit quietly reached a settlement on Dec. 18, 2015, but the battle to stop operations at the quarry was not over.

“The settlement reached was that the village was not going to pursue the citations for fines against the quarry company,” said the village’s attorney, Randall Nesbitt of Pinkert Law Firm. Nesbitt said that after the initial goal of the suit, to completely shut down the quarry through litigation, was unsuccessful, the fight wasn’t worth it.

“If it was just a fight over how much fine was going to be assessed, we were going to spend more in attorney fees in making that fight than what was going to be received,” said Nesbitt.

The village board voted down the idea of the quarry expansion under a conditional use permit in October, sending the matter back to Diltz, where it was settled in December. 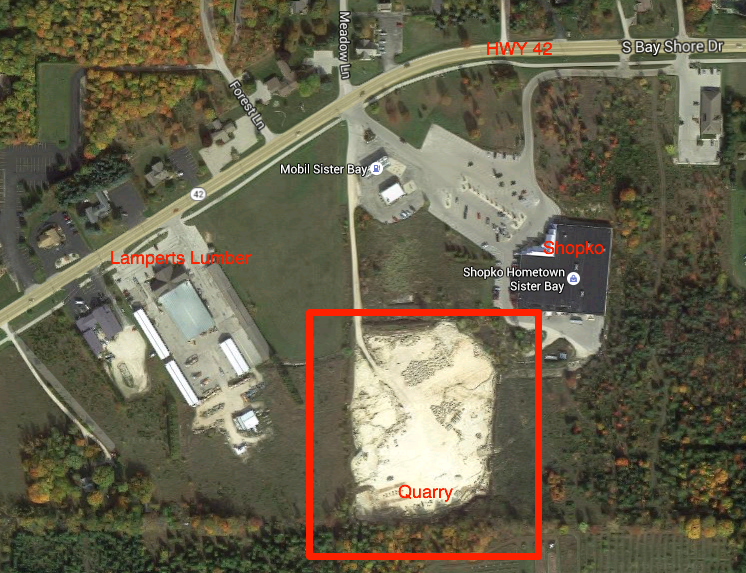 The Sister Bay Village Board approved up to $650,000 to purchase the quarry property located behind Shopko. The final purchase price has not been decided.

But without the restrictions of a conditional use permit and with the case settled, the quarry could function at maximum capacity. With the ultimate goal of shutting down the quarry, the village considered bringing in the Department of Natural Resources and the Environmental Protection Agency to enforce clean air standards.

In the end, avoiding another battle in court involving a state or federal agency was enough to encourage the village to buy the property.

The county requires a reclamation plan before a quarry begins mining. It is a plan, should the quarry shut down, to return the land to a stable condition that is in accordance with the local land use plan.

Lienau said the village had the option of implementing its own reclamation plan, but since Small already had a plan that was approved by the county, they would leave that duty to him as part of the deal.

Calls to representatives of Brandon Small and Door County Custom Stone were not returned.