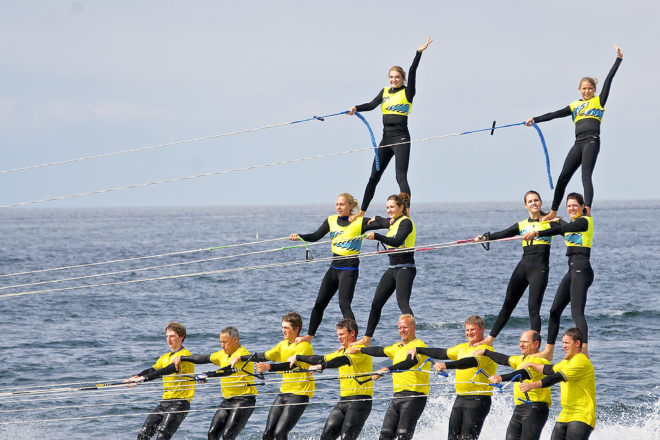 At the Aug. 16 Sister Bay Village Board meeting, board member Patrick Duffy asked for more village funds to support Marina Fest. After the short pitch, the village board started discussion whether the Labor Day weekend festival should continue at all.

“We’ve intentionally expanded the footprint of the event to showcase our waterfront. A second day has been added to try to hold tourists in the village for the weekend. Marina Fest has become a village-wide event,” said Duffy. “It’s time the village support this event. I’m asking the village consider splitting the cost for 2016 and taking the lead for 2017.”

The 2016 event is two weeks away and the village board felt a last-minute plea for funds that were not originally part of the budget was impossible to fulfill.

“Eighteen days before the event, to ask for a funding change doesn’t seem right,” said board member Kathy Enquist.

“Money is definitely tight,” said Dave Lienau, village board president. “To come two weeks before the event to ask for money is pretty difficult.”

Duffy explained that the marina loses between $15,000 and $18,000 hosting the festival. Since the event gives exclusive privilege to local nonprofits to sell food and drinks, the organizers have trouble finding opportunities for profit.

“My understanding was Marina Fest was not started because it was a dead weekend. It was a way for the marina to give back to the village,” said Lienau. “It was a thank you back to the community for what was done to put the marina in place.”

The marina has been footing the bill and giving back for 22 years, since the festival began in 1993. Now, the reserves are dwindling and the marina cannot continue to fund the event.

“I think this event is not specific to the marina. For the marina to continue to pay this, it doesn’t make sense,” said Duffy, explaining that a large portion of the events take place throughout the waterfront, so the marina should not be putting up the entire cost.

But the other board members did not want the village to carry the cost either.

“I disagree with your statement that it holds tourists in the village for the weekend,” said board member Denise Bhirdo in response to Duffy. “It’s a full weekend, everyone is here. Sister Bay is maybe more crowded and it may help the nonprofits, but if Marina Fest went away I think that most of the businesses would do just fine anyway.”

That’s when Duffy posed the question that changed the tone of the conversation.

“Maybe we just end Marina Fest. If it isn’t appreciated or pushing business, why are we doing it? This doesn’t benefit the marina.”

“I do not feel it is appropriate anymore to use taxpayer dollars to fund a party,” said Bhirdo. “Marina Fest was started to show people our new marina. It just kind of continued.”

The village board floated the idea of the Sister Bay Advancement Association (SBAA) taking over the event, but it questioned whether a festival on Labor Day weekend really brings in more business than would already be in town.

“All I’ve heard from SBAA from all these festivals is that we’re not making money,” said Enquist. “We need to figure out how to let these festivals support themselves or at least pay for themselves. Fests are great, but maybe we’re over-festing.”

Outside of those who simply enjoy Marina Fest, the nonprofits that sell food and drinks there may lose the most. The Sister Bay/Liberty Grove Fire Department, which holds its largest fundraiser of the year at Marina Fest, would lose the funds that the department uses when the village cannot afford improvements or new equipment.

“It will impact the firemen more than any other nonprofit there,” said Bhirdo.

The village did not take any action and will likely defer to the Finance Committee to determine where funds might be available to support the festival while continuing to explore other options such as shortening the event to a single day.