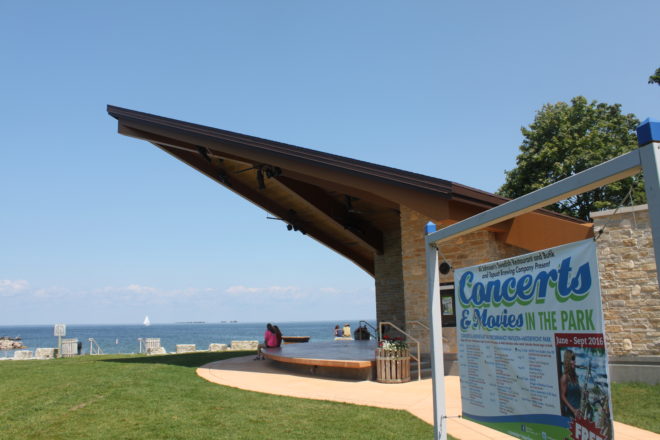 Concerts are held throughout the summer at the pavilion in Sister Bay’s Waterfront Park. Photo by Jackson Parr.

When the Village of Sister Bay bought Helm’s Four Seasons Motel last year and announced plans to take on a number of costly projects in the downtown business district, it begged one very obvious question – where would the money come from?

In response the village has come up with a proposal that would represent a first for Northern Door County, the creation of a Tax Increment Financing (TIF) district in Sister Bay. The TIF district would include much of downtown Sister Bay.

When a TIF district is established, the equalized value of taxable property in the district is established by the Wisconsin Department of Revenue, forming what is called the Tax Incremental Base. The municipality then invests in improvements in the district – in Sister Bay this might include streetscaping, park amenities, burying power lines, and adding parking – and property values go up. For the life of the TIF, all taxes collected on the increase in property values over the established base go to the TIF district to pay for selected projects. The assumption with a TIF is that the increase in property values would not have occurred without the improvements afforded by the TIF.

In short, it uses future gains in taxes to finance current improvements that help create those gains.

Richard Heath of the Baylake Regional Planning Committee provided tax collection projections to the village showing a “reasonable expectation” the district would realize $52 million of new development value over 15 years (the maximum lifetime of such a district is 23 years) if the TIF district were created, raising $10 million from taxes on that improved value to pay for TIF projects.

When Sister Bay bought Helm’s and expanded its waterfront, a citizens advisory committee (of which this author was a part) was formed to create a plan for how best to design and develop the waterfront district. Included in the wish list that came out of that process was increased parking, buried utilities, streetscape improvements, beach expansion, and possible property acquisition, with a total estimated price tag of about $15 million (half of which would come largely in the form of shorefront property acquisition between 2013 and 2020, which Sister Bay administrator Bob Kufrin said is highly speculative). 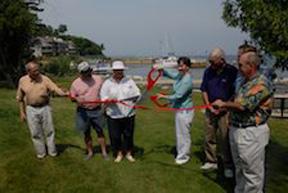 Sister Bay officials cut the ribbon at the Waterfront Park dedication in July.

Kufrin said the borrowing would likely be taken on in small increments over the duration of the TIF, rather than in a large lump sum akin to the $6.5 million borrowed for Helm’s and the Sports Complex.

Without the TIF, Kufrin said it is unlikely many of the discussed improvements will happen, nor would much-needed economic development and job creation.

“One of Sister Bay’s many goals is to become a viable year round community,” Kufrin said. “For that, you need more year round family supporting jobs.”

But there’s no guarantee they will happen with a TIF either. TIFs aren’t perfect. Originally designed to spur economic development in severely downtrodden urban neighborhoods that would have struggled to attract development without it, the tool has since been expanded to fund all manner of development, from strip malls to schools.

In one sense, TIFs produce more local control by keeping tax dollars in the neighborhood, but it can come with the cost of stifling funds that would otherwise go to schools, parks, law enforcement, and other services.

Costs for other services rise, meaning those costs are picked up by people owning properties located outside the TIF, and their taxes rise more than they would have if the TIF had not been created.

Tax increment financing has become increasingly popular in recent years, as budget crunches have squeezed out state funding for many municipal projects. Thousands of TIF districts exist nationally, and their use has been criticized in Chicago, where the city’s more than 150 TIF districts absorb eight percent of the total tax base, with funds often funneled to entice Wal Marts, Targets, and other large companies not exactly lacking for capitol.

“I’ve been in this business a long time, and I’ve never heard of a community trying to bypass the rules,” he said. “In Sister Bay, such a small town, those numbers are pretty easy to track.”

“It’s not without risk,” admitted Kufrin, who said he helped plan and execute six TIF districts in a previous job in Oak Creek, WI. “You have to make sure you are managing and monitoring growth and projects.”

The Sister Bay Village Board votes on whether to move forward with TIF district creation Aug. 21. If approved, it would proceed to a board of review comprised of Kufrin, citizen representative Denise Bhirdo and a representative from each taxing entity in the district (NWTC, the Gibraltar School District, and the County of Door) Sept. 4.

The school district, technical college, and county will have to decide if they’re confident enough in the prospects for the TIF’s success and the ancillary benefits it would bring, to wash their hands of their share of the estimated $10 million in tax dollars over the next 15 years.

Heath said the other entities stand to benefit from the TIF, as growth within the district should lead to residential and economic expansion throughout the community, not just within the borders of the TIF district.

“Hopefully the development within the district will have a peripheral impact outside the district,” he said. “You have to think bigger than the boundaries of the district.”

It’s argued that schools will benefit when the job increase draws more families to the area and increases the overall tax base, and county government and NWTC would see their base grow similarly.

Kufrin said the village would be asking the entities to sacrifice a relatively small piece of the pie.

“Fifty million dollars [of property value] in a $4 billion district is not a lot,” Kufrin said.

The plan must be into the state Department of Revenue for consideration by Sept. 30. If enacted the TIF would become retroactive to Jan. 1 2008.