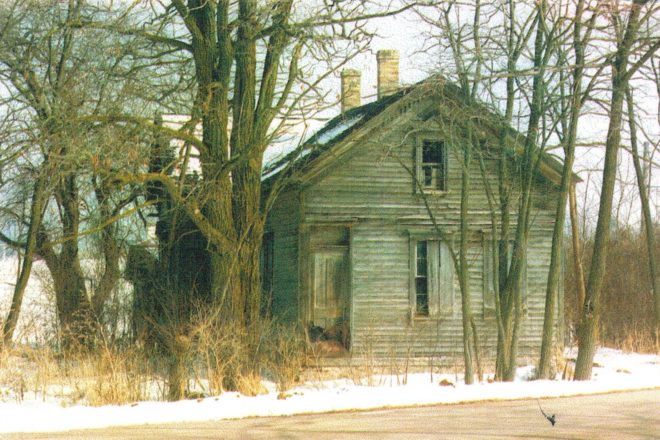 The Old Anderson House, circa 1958. Photo by Judy Steger.

The Old Anderson House Museum began on a tiny parcel of land and now is on seven acres of land with 17 restored buildings. The Sister Bay Historical Society’s volunteers, members, and donors have been telling the stories of pioneer farmers, businesses, and leaders that laid the foundation for the flourishing village.

Twenty-five years ago the Village of Sister Bay wanted to demolish the Old Anderson House at 10310 Fieldcrest Road. David Lee, a Gibraltar High School teacher, viewed this old house as having great potential as a welcome center. He approached the board and they agreed.

Curt and Eloise Lindem, who were in the process of founding the Sister Bay Historical Society, appealed to the village board to allow them to take over the project. It was dedicated to David Lee in October 1997 and opened for its first season in 1998.

Corner of the Past Museum is now open five days a week, 10 am to 3 pm Tuesday through Friday, and the Saturday Farmers Market and Heritage Programs are held 8 am to noon, with tours from noon to 3 pm.

The 2018 season includes expanded exhibits with a timeline history on the corner of Bay Shore Drive and Mill Road, Casperson’s Funeral Home, Emma Husby and more.

In celebration of the 20th anniversary many new improvements are in the works, including enhanced renovations to some artifacts, new museum props and displays, and even a new building to hold meetings, create workshop space and more. A new and enhanced Volunteer Program is starting this year to engage people in these projects. For more information visit sisterbayhistory.org.