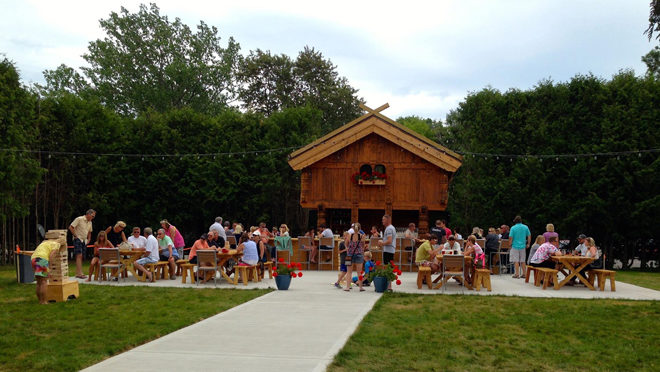 The lot next to Al Johnson’s had sat empty for decades until the family built Stabbur Beer Garden and brought excitement to the space. Submitted.

Sister Bay took the first step in addressing what it believes is a detrimental parking problem within the village by creating a new Ad Hoc Parking Committee. The committee will review current parking use and village ordinances and make recommendations to relieve the summertime problem.

Village board members Denise Bhirdo and Nate Bell will serve on the committee along with local business owners Britt Unkefer and Chad Kodonko. The fifth member is Chris Milligan, coordinator for the Sister Bay Advancement Association.

“Everybody hears about good things that happened in Sister Bay and that’s all good for us in the long run, but we try to confront some of the issues that raises,” said Village Board President Dave Lienau at a Nov. 3 village board meeting. “We’re trying to confront some of the issue that raises. If you build it, they will come. We built it, they came.”

The village has come a long way since the label of an economic dead zone in 2012. Now, Sister Bay is managing the growing pains of fast-paced development upon completion of the highway reconstruction, beach, and the construction of several new businesses in town. But before the village goes and lays asphalt on another green space, the new committee will look into other options including parking signs, a trolley system and, yes, asphalting a new parking lot.

Parking constraints are a common refrain throughout all Door County communities in the summer. Towns and villages have devoted hours of conversation and public resources to finding solutions to a problem that makes itself known just a few weekends in the summer.

“Depending on who you talk to it’s either a really big issue or it’s not that big of an issue,” said Lienau. “Any time I went downtown in the summer trying to find a parking spot somewhere, it might take me a few minutes, but I usually found one without any problem even on the busiest weekends. At the same time people will turn around and tell me they can’t find a place to park. Well what does that mean? They can’t find a place close?”

“Sister Bay keeps getting busier and busier every single year,” said Chris Janisse, employee at Husby’s. “It might not be the biggest issue now but within two years it might be.”

Village Administrator Zeke Jackson read a list of 20 ideas to address the parking problem to the village board and residents in attendance on Nov. 3. Use of the Dahlstrom lot next to the fire station, review of parking ordinances, a trolley system and employee parking had the most weight in the discussion.

Sister Bay has a set of ordinances in the municipal code detailing restrictions on where people can park. But the bulk of conversation on village parking rules will be centered around parking requirements for the businesses in town.

The village requires a business to provide a certain number of parking spaces depending on the type of business it is. Restaurants typically need to have one space for every four seats in the building and an additional spot per employee at peak business hours. Lodging facilities typically need one spot per room and one spot per employee. These requirements force the business owner to alleviate the parking problem that they bring when they open a new business.

But those requirements have been waived for more than six years in Sister Bay.

“The village board… six years ago, put in place a parking moratorium because we wanted businesses to be able to expand, put more business in place and not have the burden of what was then our current ordinances that require parking, the amount of parking that was required,” said Lienau. “I think we were successful with that and that moratorium expired in September of this year.”

The village is planning to figure out just how much parking there should be in the village if every business satisfied these parking requirements.

The village approved the development agreements with Boathouse by the Bay and Chop with the idea that this new comprehensive look at the parking problem would help alleviate the issue.

There were no complaints with using village-owned property near the fire station on Mill Road to build a new parking lot, either temporary or permanent. Jackson also suggested hiring an outside firm to come in and do a time-of-use study to determine how severe the parking problem is at different times of day.

In order to fund these various ideas, the village has floated the idea of metered parking, recognizing that enforcement would be nearly impossible.

At an Oct. 25 plan commission meeting, commission members discussed charging each business a fee per parking spot that they lacked under the current parking ordinance requirements and using that revenue to fund some kind of parking solution.

But before turning to expensive problems, Britt Unkefer, owner of Wild Tomato and member of the newly formed Ad Hoc Parking Committee, said that signage should be the first consideration.

“So I think directing people where you want them to go…might be number one before you go and try to do any sort of ordinance or add more parking in a parking lot or something like that because it’s very cost effective,” said Unkefer.

He cited his experience with his other restaurant in Fish Creek, where the Town of Gibraltar improved parking signage around the under-utilized town center.

“The complaint was we had parking right behind the town building there that wasn’t even being used and we did exactly that. We put in some of the blue parking signs and it’s full now.”

Signage could be used to highlight parking along Mill Road and at the library after hours, costing the village significantly less than a new parking lot or funding a trolley through the summer.

“I contend that we don’t have a parking problem, rather, we have a transportation problem,” wrote Zeke Jackson in a Sept. 27 report to the plan commission. “I have proposed that we lease a Trolly (sic) to address the situation…The project has made it through the budget process thus far, and I hope it will survive to approval in October.”

Jackson’s hope was realized as the village set aside $21,600 in the 2017 budget for the lease and maintenance of a trolley under the line item “public transportation and parking.” An additional $5,600 was included in wages for the trolley service. The amount is slightly below the net expense estimate of around $29,000.

A survey sent out to members of the Sister Bay Advancement Association (SBAA) asking about interest in the trolley system came back positive, with 25 businesses in favor and six unfavorable responses. The question posed to business owners did not explain the source of funding for the trolley system.

Sister Bay is not the only community looking at using a trolley system for public transport. Gibraltar is considering the method leading into their waterfront redevelopment plan and highway resurface project.

Jackson recommended the trolley run three days each week for 12 weeks in the summer with stops connecting the Country Walk Shops and the downtown area. The public transportation will allow the village to make use of parking lots outside of the downtown district, lifting the burden on the limited parking downtown.