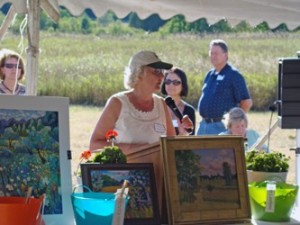 Juliana Neuman appeared for the last time as finance director for the village of Sister Bay at the May 19 meeting of the village board of trustees.

“I’d like to thank the board, and actually past boards for this job I have had with the village,” she said at the meeting. “It’s been interesting and challenging. I learned a lot and I’ve appreciated it.”

“We’ve appreciated all your time and effort,” said Village President Dave Leinau. “You have helped us immensely with the financial picture.”

The day after that meeting, Neuman was preparing to leave that evening for Germany, where she had studied as a student. She’ll return to Door County at the end of June to help the new village finance director – who has yet to be named although several people have been interviewed.

“I’m turning 72 at the end of June and I’m getting tired,” Neuman said about her decision to retire. “I took this on in my 60s. It’s longer than many people work. I want to enjoy this place where I live.”

Although Neuman, originally from Chicago’s South Side, had been coming to Door County since the 1970s, she made the move 10 years ago to be with her mother, Ruth Neuman, who lived on what had been an abandoned farm on land that straddles the towns of Baileys Harbor and Gibraltar.

“My mother was active in the Door County Environmental Council in the ’70s and early ’80s when they started talking about the possibility of a land trust movement. She became interested and volunteered to put a conservation easement on her property. I’m living in what was her home, on the first land trust property in the county.”

Neuman moved to Door County in what turned out to be her mother’s last year of life.

“I had been the finance director of the Hyde Park Neighborhood Club prior to coming here,” Neuman said.

At the time, Sister Bay was seeking a part-time utility clerk.

“I accepted, even though I had previously been a finance director,” she said. “I took the part-time utility clerk job so I could spend time with my mother, who at the time was at Hearthside being cared for.”

She began the part-time job in January 2005. “I thought I was going to do freelance bookkeeping on the side.”

A year later, in the spring of 2006, then-village president Bob Kufrin asked Neuman to take on oversight of all the village finances.

She said the biggest part of the learning curve was understanding the government taxing system.

“I had to learn how that all worked, how properties are assessed and how the tax request for the year is calculated. I had done budgets before, but not that type of budget.”

Until 2009, Neuman was performing duties as finance director and utility clerk.

“And it was really too much,” she said. “The village has grown over the years. Starting in ’06, when we bought the first waterfront property, it got more and more challenging. I had to handle the utility billing and accounting on the side. I finally convinced them at the end of ’08 that they needed to hire a utility clerk. Martha Baker fills that position and does an excellent job.”

Neuman said it has been exciting and challenging to oversee some of the big-ticket items in the village during her term in office.

“I think the residents of Sister Bay have had to put up with a lot with all of this property acquisition and then big projects, including the DOT coming through to resurface the downtown Bay Shore Drive, and I don’t think taxes have increased horrendously. Certainly there’s a tax burden with all the debt the village had to take on,” she said. “Once all these projects are finished – the beach and the roadway – people are going to be pretty pleased with the village and its potential.”

And her advice to whomever replaces her as finance director?

“I guess to be patient with a lot of detail work. That’s the main thing,” she said. “It’s been a wonderful experience for me. Coming up here, I was really surprised to fall into something that fit me as well as this did. It’s not easy for people to find jobs in Door County that really suit them.”