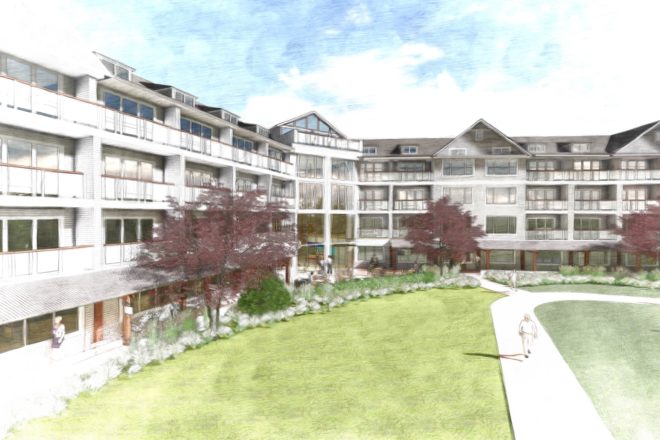 Developer Chris Schmeltz of Jaco Management said the first rendering is a rough sketch and likely to change, adding that a revision will include more “coastal” elements.

The Sister Bay Plan Commission took its first look at plans for a 40-unit hotel and retail space on the remainder of the vacant lot on Bay Shore Drive between CHOP restaurant and the Sister Bay Bowl. Parking and building height stood out as the primary concerns of the commission, both of which came down to nuances of the village code.

Due to the slope of the lot, developer Chris Schmeltz of Jaco Management considers the building to be three stories with an additional ground level while the commission calls it four stories. The building permit application lists the height as 45 feet.

“My biggest concern is that it is a four-story building,” said plan commission chair Denise Bhirdo. “But it is also on a slope so it sounds larger than what it actually is going to be.”

The village code limits building height to 35 feet unless the development is a hotel and the lot is on at least one acre, which increases the limit to 45 feet. The entire planned unit development for the project comprises approximately 1.9 acres, but the hotel will only take up a portion of that. 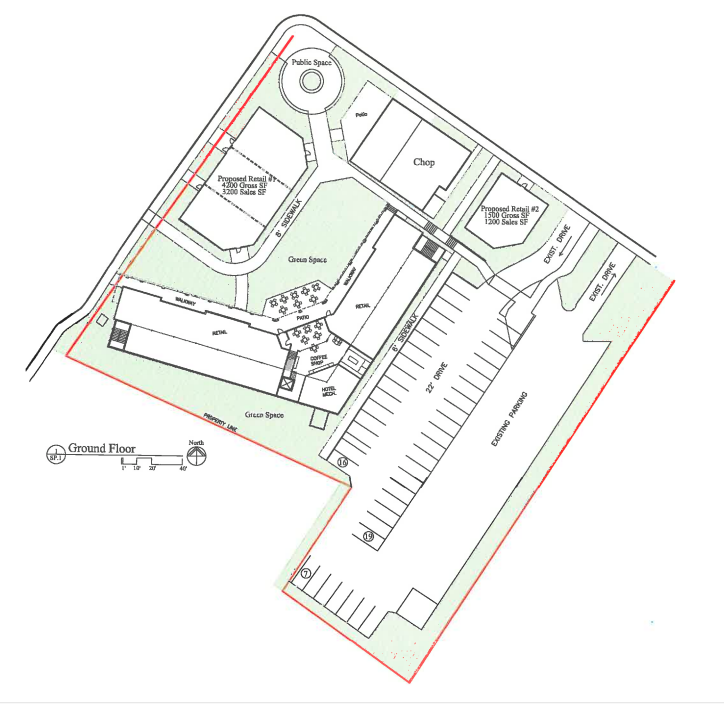 An overhead look at the site plan for a proposed hotel and retail complex in Sister Bay. Chop restaurant is located at the top of the plan.

When the village was making plans for the property in 2015 and 2016, the hope was that a single developer would come along and build up the entire property. When that didn’t work, the village divided it up into many small lots to be sold separately. Now, the village got what it originally wanted.

“I think we are all happy that somebody wants to do this project,” said Bhirdo, clarifying that her strict adherence to the village code is not an attempt to stop the development of the property. “We also have to follow the rules for everyone.”

“Unfortunately before [Schmeltz] came here there was a lot of latitude given to other people and businesses,” said commission member Mary Kay Shumway. “There is some precedence with leniency.”

“It seems to me they [Schmeltz] are making an effort to alleviate a problem that’s going to be there no matter what,” said commission member Marge Grutzmacher. “They are at least attempting to deal with that problem to the best of their ability.”

The commission will again explore a fee in lieu of parking, a policy that the Ad Hoc Parking Committee discussed before it disbanded in November after continuously failing to reach a quorum. 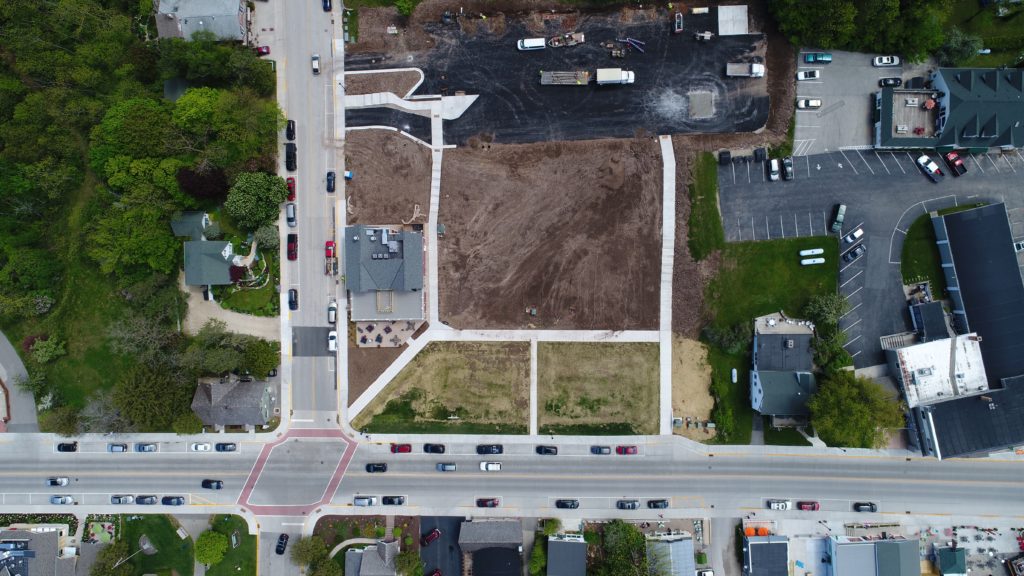 The proposed hotel would be located in the large dirt square at the center of this aerial photo of downtown Sister Bay. The retail portion would be located on the parcel along Highway 42 at bottom. This photo was taken in June of 2017. Photo by Jacob Dannhausen-Brun.

Initial fees for businesses discussed were a one-time $500 fee per parking space shortage or $100 per space annually.

“This money to alleviate this problem has to be raised somehow. It can’t constantly go back to the taxpayers,” said Shumway.

Schmeltz was open to the idea of a fee in lieu of parking.

The commission will discuss parking fees at its February meeting.

Approval of the project is in preliminary stages. The village still needs to approve plans including architectural design and landscaping, and sign a development agreement with Schmeltz. He hopes to have the hotel open by spring 2019.