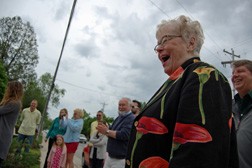 Marge Grutzmacher reacts to the unveiling of benches honoring her and fellow Sister Bay volunteer Ron Kane (who stands at center, clapping) in Waterfront Park in downtown Sister Bay on June 8. The benches were installed on behalf of the two village activists by the Sister Bay Advancement Association. Photo by Jim Lundstrom. 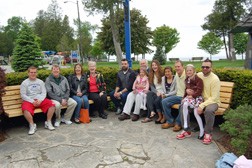 The families of both Marge Grutzmacher and Ron Kane sit on their respective benches at Waterfront Park. Photo by Jim Lundstrom.