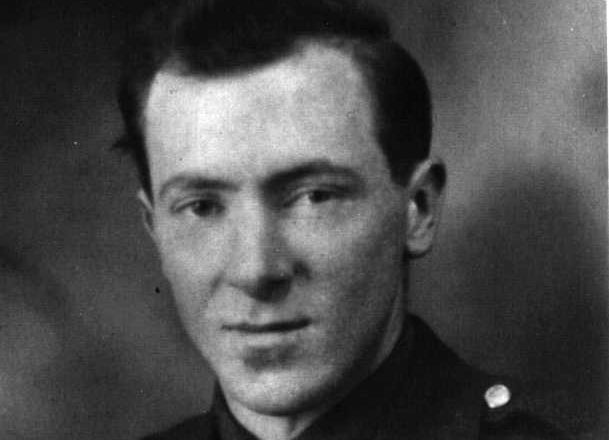 On March 1, 1946, American Legion Post 527 was formed in Sister Bay and named in honor of Billy Weiss.

Greg Casperson, whose father, Clyde, was the second commander of the post, said he’d often heard his father tell how the post’s name was selected. Because the post’s founders did not want to base the choice on rank or privilege, they wrote the names of Door County men who had lost their lives during WWII on slips of paper, and Weiss’ name was drawn.

William “Billy” J. Weiss, 22, was killed in action in France on Aug. 1, 1944: the 15th man from Door County to die in WWII and the second to die in the “French invasion.” His death was reported as front-page news in a local newspaper on Aug. 25, where he was identified as Pfc. William “Red” Weiss.

Born in Baileys Harbor on Aug. 12, 1921, Weiss was the youngest of five children of Moritz and Agnes (Pedersen) Weiss. Other survivors included his brother Eugene, also serving in the Army; and sisters, Beulah Sodders and Ruby Cornell. His brother Don predeceased him.

Weiss graduated from the Baileys Harbor School and was one of the 57 members of the Class of 1940 at Gibraltar High School, where he was active in FFA. He was also a charter member of Baileys Harbor Boy Scout Troop 29, which was created in 1940 under the direction of Scoutmaster Tom McArdle. When the troop started a first-of-its-kind court in 1941 to try members for violating scouting bylaws or oaths, Weiss was elected the court’s judge. He also loved outdoor life: boating, hunting and especially fishing. A dream he never fulfilled was to go trout fishing in the “Canadian wilds.”

A member of the 112th Infantry Regiment, 28th Infantry Division, Weiss was buried in the Normandy American Cemetery and Memorial in Colleville-sur-Mer, France.

Don Sitte, a longtime American Legion member, represented Post 527 and Billy Weiss at a gathering to honor Wisconsin men 60 years after their deaths on Aug. 1, 1944. Tom Mueller, a relative of the Weiss family, organized the gathering.