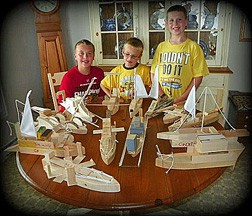 Tim, Charlie and Sam Hoying proudly display 14 of their boats, which were constructed from 2010 to 2013 at Marina Fest. The boats are on permanent display in the Sister Bay home of their grandparents, Dave and Sue Kolb.

The Sister Bay Lions Bill Steger Memorial Boat Building tent was recently set up at Marina Fest; during the past eight years, 1,875 children have built their own boats.

Steger was a former Lions club president and member of the marina committee who developed the boatbuilding concept.

Upon his death the Lions Club elected to carry on and expand the project as a service to the community. Each year since his death the Club has paid the expense for the materials and members have provided 200 hours of volunteer time to cut and sand the models, cut wood shapes, booms, masts and sew the sails.

Lion members hear comments from adults who said they have boat models from previous years on display in their residences. The preservation of boat models built by the children and grandchildren is a byproduct that is the ultimate tribute to Steger’s concept.