The Village of Sister Bay will consider its second $5 million waterfront property purchase in four years at Tuesday’s Village Board Meeting.

The village has discussed buying the Al Johnson’s Boutique property for at least 10 years, but most thought it wouldn’t be available for several years. Early this winter, the Johnson family asked the village to make an offer. 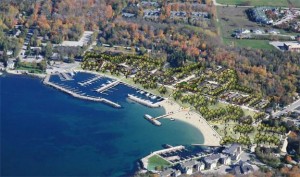 The Al Johnson’s Boutique building is located in the center of the village’s Waterfront District Master Plan.

Village President Denise Bhirdo said the village has approached the Johnsons to gauge their interest in selling on an annual basis, and in December the Johnsons asked the village to make an offer, which it did in January. If the village board approves the purchase at Tuesday’s board meeting, the sale would close in early June. Bhirdo is in favor of the purchase, but approval is not certain.

“I hope people are just as happy with this purchase as they were with the purchase of Helm’s,” Bhirdo said, “but I’m also very aware that two large purchases in four years is going to affect the levy.”

In 2007 the village borrowed more than $5 million to purchase Helm’s Four Seasons motel on the waterfront. That purchase received a largely warm reception. A second large purchase in tough economic times could be a tougher pill to swallow.

The village would need to borrow $5 million for the property, and about $200,000 more to demolish the building and landscape the parcel. It would bring the village’s debt load to about $16 million. The village is allowed to carry up to five percent of its total valuation, or $21 million, in debt at any given time.

The .96 acre (40,000 sq feet) property includes 292 feet of shore frontage. It would link the village’s marina property to the north and the Waterfront Park property to the south, creating 1,936 consecutive feet of public waterfront access. It also includes a 26-slip marina that would continue to generate revenue to offset the purchase.

“This is the missing link between two ends of the village waterfront,” said Administrator Bob Kufrin. “Any redevelopment of the waterfront can’t happen without the Al’s property or their cooperation.”

In 2007 Lars Johnson said his family was open to tearing down the boutique if the village would either tear down or move the old Village Hall immediately to the south of the boutique. Bhirdo conceded that such an option would be the cheaper way to accomplish the village’s goal of opening up the waterfront, but it wouldn’t give the village security.

Kufrin said the board is taking into account that Johnson could develop the property any way he chose or sell to someone else if the village does not act. 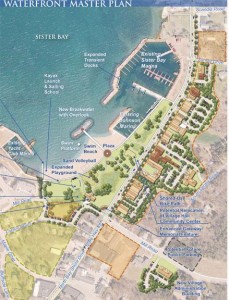 “Al is coming to the village first rather than putting it on the open market because he believes in the greater good to the public,” Bhirdo said. “I think that reflects on his character.”

Tuesday’s board meeting will provide residents the opportunity to ask questions and express concerns. The board will take a vote on the purchase at the meeting. If approved, the Sister Bay Café would be the only piece of the village’s long-term waterfront park plan in private hands.

The property has an assessed value of $3.12 million and the Johnsons pay about $33,000 in taxes on the parcel. That loss would be offset by marina income, Bhirdo said. Kufrin said grants could also help offset the purchase price.

“But what will really offset it is the redevelopment of the east side of the highway as people take advantage of the incredible vistas this will open up,” he said. “We’ve made several zoning changes in the last year that make it more enticing for developers.”

Those changes include reducing setbacks, raising caps on building heights, and building flexibility to make it easier for true transient hotel-style lodging to be built downtown.

Bhirdo said the purchase could delay some beach improvements, which are estimated to cost up to $2 million.

“We have borrowed a lot of money, and we may have to scale back beach improvements for the sake of buying the Al’s property now,” Bhirdo said.

If the purchase is approved, the village would likely reach an agreement for Al Johnson’s to continue operating the boutique through next summer. Demolition would begin after the tourism season ends in November.

Boaters who currently rent slips at the Al Johnson’s marina will retain their rights to those slips for three years, at which point they will be lumped into the Sister Bay Marina pool to be claimed according to the village waiting list.

The expenditure is high, especially in light of the recent Helm’s purchase, but Bhirdo said she will consider it with a long-term vision.

“My question is can we afford to not purchase the last missing link in opening up the waterfront to the public forever?” Bhirdo asked.