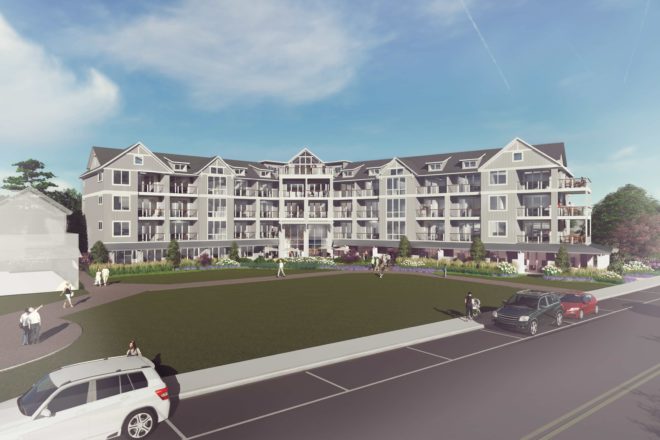 A rendering of the view from Bay Shore Drive of the 40-unit hotel and retail building at the Sister Bay Marketplace.

The Sister Bay Plan Commission took the first steps in approval of a four-story, 40-unit hotel and retail space at the vacant property off of Bay Shore Drive and Mill Road. The commission had few questions, thanking developer Chris Schmeltz of Jaco Management for adjustments he made to the design following the first rendering presented to the commission in January.

The commission approved the site plan, floor plan, building elevation and building materials. Schmeltz will return for approval for the lighting, landscaping and utility plans.

“We’d like to break ground right after Fall Fest, so Oct. 15, and we’re looking for an opening date of June 15 [2019],” Schmeltz said. “That’s a pretty tight window so we’re going to have a busy summer of planning and getting contractors lined up.”

The commission also approved a nine-unit inn and cafe on the corner of Mill Road and South Spring Road. The inn, designed by architect Virge Temme, will be LEED certified (Leadership in Energy and Environmental Design).

“Everything about this building has to do with being environmentally sustainable,” Temme said.

The environmentally sustainable features include a 3,000-gallon cistern to collect and repurpose rainwater, porous paving and use of LED lights and low-flow plumbing.

While the commission approved the project’s design, Temme will still need to sign a development agreement with the village.

Temme hopes to begin construction as early as March with the cafe opening in August. But she may have to work around a restriction in the development agreement which prohibits outdoor construction in the village from June 30 to Oct. 15. As long as walls are up, construction on the interior of the building can continue throughout the summer. 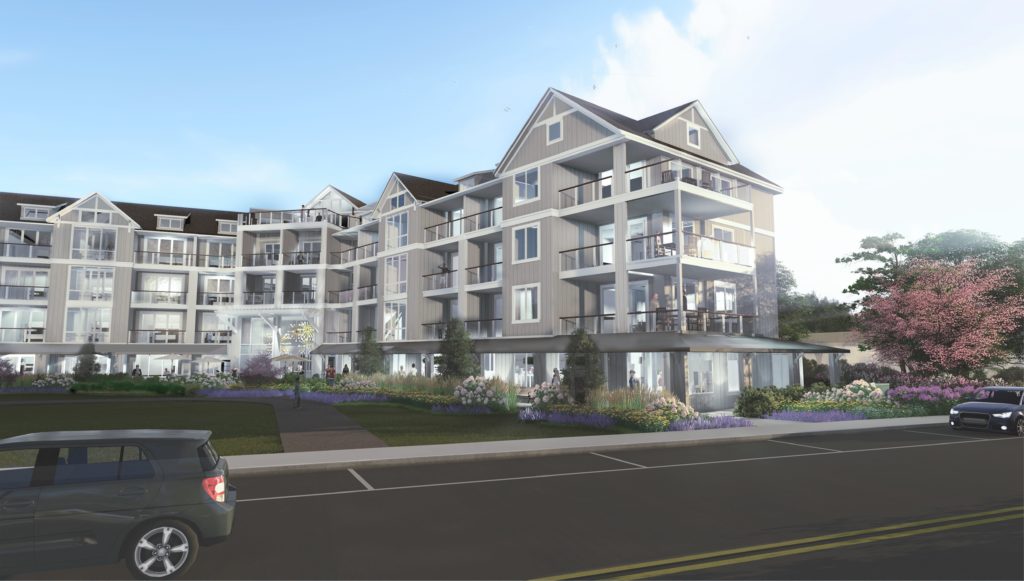 A rendering of the proposed hotel next to CHOP restaurant in Sister Bay along Bay Shore Drive.

Pat Quinn abandoned his push for a five-unit hotel condominium on Mill Road following complications with the parking layout and a general desire by the commission to provide transient rentals and not a condominium in the downtown district.

Quinn originally came to the commission proposing an inn on the property, which would have guaranteed transient rentals.

“Because you have changed it from an inn to a condo hotel I’m very concerned,” said Denise Bhirdo, commission chair. “You are asking for an awful lot of exceptions for this project. I am uncomfortable with all of those exceptions.”

The parking configuration for the required nine parking spots was the sticking point for Quinn and the commission. Both choices between angled parking on the north side of Mill Road in front of the property and perpendicular parking had drawbacks.

“I have some real reservations about that perpendicular parking because I do think it is going to impact public safety,” said commission member Nate Bell. 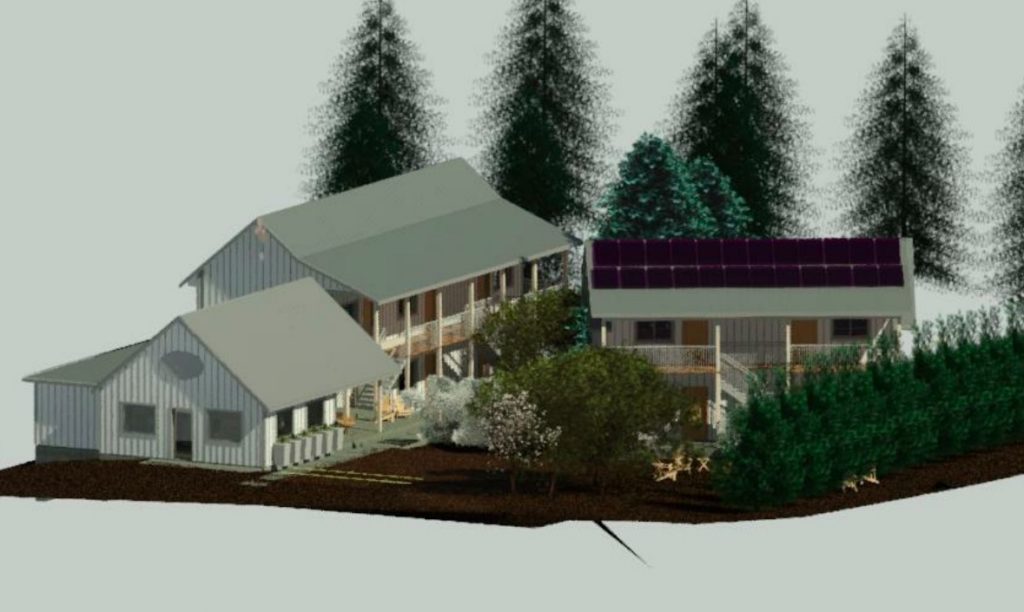 A rendering of the LEED certified nine-unit inn on the corner of Mill Road and South Spring Road.

While in favor of all of the developments going up in the area, Fire Chief Chris Hecht said perpendicular parking could complicate egress of emergency vehicles from Mill Road onto Bay Shore Drive.

“The congestion in that intersection has become increasingly difficult for us to navigate,” Hecht said. He added that vehicles backing out of and pulling into perpendicular parking spaces will further impede traffic flow.

But angled parking would require guests at the property to park while heading westbound, which Quinn believes is unlikely given most traffic will turn off of Bay Shore Drive onto Mill Road going east.

“We’re going to have to take a pass,” Quinn said, conceding to the restrictions imposed by the property and the village code. He thanked the commission for their efforts and requested he be notified should the commission’s approach to transient lodging or parking shift.

In other village news: