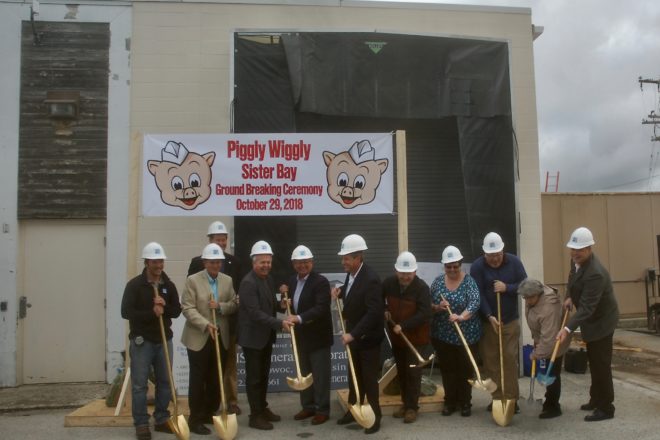 Despite a chilly wind and gray skies, it seemed inexplicably sunny as ground was ceremoniously broken for the long-awaited expansion of the Sister Bay Piggly Wiggly.

No ground was actually disturbed during the groundbreaking, since it was held in the grocery store’s well-paved southern parking lot, which will serve as the staging area for the expansion.

“It’s going to be interesting over the next several months while we’re attempting to construct while still conducting business. We’re going to need everybody’s patience,” co-owner Tom Nesbitt said to those in attendance, which included members of the Country Walk Owners Association, village officials and interested residents and customers.

Nesbitt also had praise for the village of Sister Bay and its staff. “The amount of cooperation here is remarkable. It doesn’t happen every place.”

His nephew and business partner Dan Nesbitt thanked the Country Walk board for helping make the expansion happen. He also thanked the patience of the people of Sister Bay and Northern Door for sticking with them even after it had become abundantly clear that the space had outgrown the demand.

“We really look forward to this project,” he said.

Enthusiastically in attendance was Gary Suokko, chief operating officer of Sheboygan-based Piggly Wiggly Midwest, who said it was about time for this iconic Piggly Wiggly to blossom into the thing it really could be – a showcase for the brand.

“The time is here! The wait is over!” he said. “We are so so proud of this store in Door County. It keeps our name out there. Everybody knows Piggly Wiggly because of the Sister Bay Piggly Wiggly. You are going to have a gorgeous grocery store here in time for Memorial Day.”

Then he led the crowd in the Piggly Wiggly slogan, although he struggled to find the word slogan or motto, and instead latched onto the first offering, which was “schtick” from Dan Nesbitt, which Suokko obviously heard as “stick,” and, so, introduced it as “the Piggly Wiggly stick.” But it didn’t matter because the crowd response was unanimous: “Piggly Wiggly! Shop the Pig!”