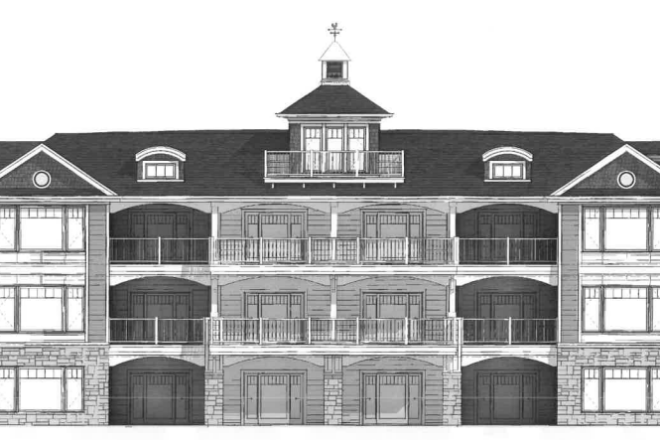 Al Gokey’s plans for two condominium buildings at the old schoolhouse property at the top of the Sister Bay hill would resemble the Marina View condominiums north of the Boathouse on the Bay restaurant.

The Sister Bay Plan Commission okayed a change in the development plan for the old schoolhouse property on the bluff at the corner of Highways 42 and 57.

Developer Al Gokey had previously planned to build five single-family homes on the property that overlooks the village, but village Administrator Beau Bernhoft said Gokey struggled to sell the units and requested a shift to condominiums that could give water views to more units.

The plan includes 18 units in a pair of three-story buildings similar to the Marina View condominiums, also in Sister Bay. The plan commission approved the change on the contingency that the developers provide new site plans and landscaping plans at a special board meeting Sept. 16 to enable construction to begin this fall.

The village has planned for residential development on the site for more than a decade. Gokey originally committed to building a spec home on the site by the end of 2015. In a February 2016 statement to the plan commission, he guaranteed a home would be constructed within two years. To date no homes have been constructed on the site, but Gokey has paid taxes on the property based on the minimum assessed value.

Bernhoft said the plan commission didn’t warm to the idea. Members expressed their preference for more commercial, rather than residential, development in the core area.

Just 19 months ago, the village approved the 12-unit Marina View condominium project three doors down the street – a project that doesn’t include any commercial space. However, it later amended the zoning code for the downtown business district to avoid losing downtown commercial activity.

“If residential and condo is the project all the developers want to do, where you get the fastest and largest return on investment, eventually you’re going to lose many of your restaurants and shops,” said Plan Commission chair Denise Bhirdo.

Armbruster’s project would include 20 units in a four-story building, which he hoped to pursue through the Planned Unit Development process. To build to four stories in Sister Bay requires including commercial space on the first floor and for 80 percent of units to be transient. Armbruster’s proposal did not meet either criteria.

“There were a number of aspects of the proposal that just didn’t come close to meeting our code,” Bhirdo said.

With a Sept. 30 deadline looming, the village and developer Chris Schmeltz are waiting for word on an economic-development grant from the Wisconsin Economic Development Corporation that would rekindle work on the Dörr Hotel.

Schmeltz originally submitted plans for the hotel in December of 2017. Last fall he sought and received a concession from the village to exchange four commercial units for hotel rooms on the first floor, a change he said was needed to offset rising construction costs.

In August, the Door County Economic Development Corporation worked with Schmeltz and the village to apply for a $250,000 state grant to get the project off the ground. Schmeltz has until Sept. 30 to purchase the property from the village.