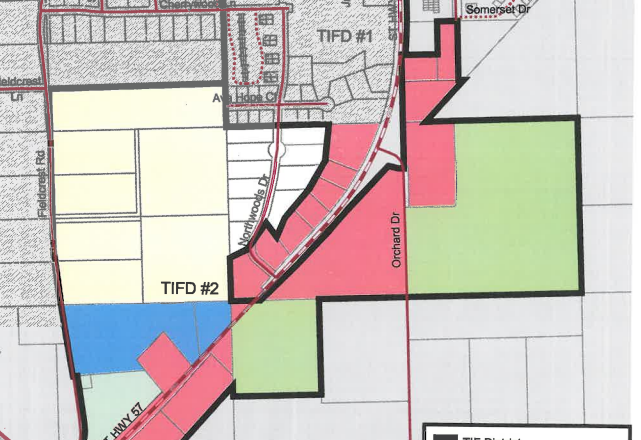 The village made some amendments to the proposed TIF district at its March 20 meeting, including removal of Northwoods Drive, but this map depicts most of the property likely to be included in the district.

The Village of Sister Bay is looking to develop a second tax increment finance district (TIF) along the southern corridor of Highway 57. The TIF, crafted by former Sister Bay village administrator Bob Kufrin, seeks to finance approximately $1.6 million in sewer and water connections to the proposed wedding barn development on Fieldcrest Road.

Kufrin, who now serves as a consultant to the village, believes if utility extensions were done through special assessment – a cost to the individual property owner based on how much of the utility served their property – it would cripple potential business development.

“In many cases these projects become impossible to cash flow with that much special assessment,” Kufrin said.

Under a special assessment, the proposed wedding campus on Fieldcrest Road would be charged an estimated $700,000. Other properties with significant utility frontage would see similar special assessments. With a TIF, the village can encourage that development by absorbing the cost upfront and earning it back through the expected property tax revenue.

“You’re looking at $8.5 to $10 million over a 10-year period of time,” Kufrin said of the anticipated construction value. “Without the TIF running sewer and water down there, projects of this scale just will not happen.”

The village is being more cautious than they were for the first TIF they enacted in 2008.

“The first one that we did, and it was a great idea, and then unfortunately I think the first TIF got off on the wrong foot,” said village board member Denise Bhirdo.

Bhirdo referenced the village’s purchase of two premier beachfront properties in the first TIF very soon after it was created. That move put the TIF in the hole for approximately $10 million right off the bat, and since the properties would stay in the village’s name and not generate any property tax, it has been difficult for the village to climb out of that hole.

But village president Dave Lienau said this TIF won’t go into any debt until tax-generating development is guaranteed.

“If nothing is going to happen on Highway 57, then sewer and water doesn’t go,” Lienau said. “Our upfront costs are limited until the actual development is going to take place.”

One condition for creation of a TIF is that the area must be blighted, or so unattractive for development that it would not occur without some significant investment.

“It’s my belief that without the TIF there will not be development out there on the scale of what you’ve seen projected here,” Kufrin said.

As evidence, he pointed to soil and groundwater pollution due to the historic presence of orchards and salt contamination at the county highway shop on Highway 57.

“The installation of village water and sanitary sewers removes the impediment of possible groundwater contamination,” Kufrin wrote in his report to the board.

The argument of blight would have to be made in front of representatives from the Gibraltar School District, County of Door and Northeast Wisconsin Technical College, which would have to agree to forego the increase in property tax revenue for the life of the TIF.

The City of Eau Claire is defending its definition of blight in front of the Wisconsin Supreme Court, with a group called Voters With Facts arguing that development of a district in the city would occur without the use of TIF funds. The Supreme Court’s decision is expected to significantly change or codify the existing TIF law.

In an interview after the meeting, Lienau said the village did not discuss the possibility of water and sewer expansion to the wedding campus property with the developers. That developer has already purchased the property and received a conditional use permit, meaning the project would likely happen without TIF incentives.

But Lienau said the utility expansion is in response to preliminary talks with other developers looking at projects along Highway 57.

“There would be no discussion if it was just the wedding barn because it’s about a $2 million dollar project,” Lienau said. “The projects as proposed, if in fact they happened… it would pay for itself within the life of the TIF.”

The village is aiming for adoption of the district in June, with an aggressive timeline of public hearing, notices and meetings with the other taxing entities taking place over the next few months. The village needs to complete the adoption process by Sept. 30 for it to be effective in the next tax year.