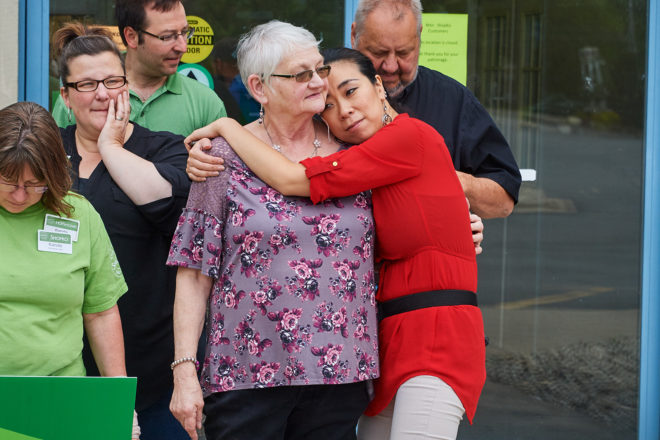 The doors at Sister Bay’s Shopko closed for the final time at 6 pm Sunday, but that didn’t stop people from driving into the parking lot, hoping it was open.

But no. All that remained was a mostly empty store and a group of employees who feel cheated by Shopko owners Sun Capital Partners, a private-equity firm that bought Shopko for $1 billion in 2005.

The company filed for bankruptcy in January 2019, and the next month, it announced the closure of 251 stores, or 70 percent of its locations in 24 states. On March 18, the company announced that it had been unable to find a buyer and therefore would close all the stores before the end of June. One month later, Shopko announced that despite having signed a contract for employee severance pay, only the employees at certain locations would receive severance.

“Of those seven, only three got severance, and six of the seven got a fair retention bonus,” Pride said. “The seventh phase, which is actually part of our phase, did not get either one of those for our teammates, so we partnered with a nonprofit group called United for Respect. They are working with legislators, writing letters to parent company Sun Capital to get a fund established – very similar to what happened with Toys R Us last year.”

United for Respect was able to win a historic, $20 million financial-assistance fund for former employees from the private-equity owners of Toys R Us.

According to a letter sent to Sun Capital co-CEOs and signed by scores of Shopko employees, the reason for Shopko’s bankruptcy is Sun Capital’s “reckless” Wall Street games.

“In 2005, we watched anxiously when Sun Capital bought Shopko in a leveraged buyout that loaded $1 billion of debt onto our company,” the letter states. “You then sold 178 Shopko properties for $815 million in a sale-leaseback that created unnecessary additional financial burdens on our stores. As our company struggled under overwhelming debt, you made sure to pay yourselves dividends, forcing Shopko to take on additional liability.”

Luckily, Pride said, most of his team members have been able to land on their feet.

“Almost everyone has gotten something. Some people are starting jobs as soon as tomorrow,” he said. “I couldn’t be more happy for our team.”

One of those employees, Darrick DeMeuse, will start his new job at Tractor Supply Company in Sturgeon Bay on July 1, but he will also miss the friends he made working at Shopko the past four years.

“Definitely we’ll stay in touch,” he said. “It’s going to be hard. It’s been my life for the last four years. I wouldn’t trade this experience. I think I actually grew from it. I got it at a time when I needed it. I had just lost my grandmother; it was something that I needed. It’s not just coworkers; they really are another family.”