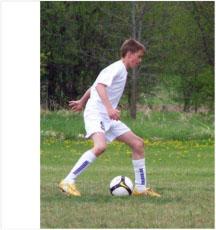 Sammy Johnson of Sister Bay was called up to participate with the Wisconsin Olympic Development Program’s (ODP) 1993 birth year squad. He will complete with an 18-person team in the ODP Region II Tournament & Camp in Kansas City, Missouri from July 15 – 18.

Johnson has participated in the 1993 WI ODP Pool the past two years while also playing for his club team (Allouez Avalanche) and Gibraltar High School Varsity program. In addition, he will be traveling with his Allouez Avalanche Club Team to the upcoming Schwan’s USA Cup International Tournament the weekend of July 9 – 12, being held at the National Sports Center in Blaine, Minnesota.