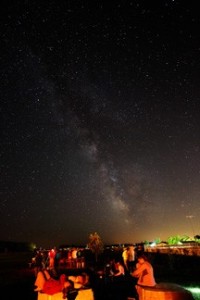 Stargazers take in the spectacle of the Perseid meteor show.

“Every year around Aug. 12 the Earth passes through a dirty patch of space left behind by Comet Swift Tuttle,” explained college chemistry professor Holly Erskine. If you are in a place with low light pollution, you can see bits of dirt the size of a grain of sand “hit our atmospheric windshield” and burn up in a blazing display, commonly called a shooting star.

Tim Erskine, founder of Night Sky Ventures, Inc., founded the Sister Bay Star Party because he wanted to share his appreciation for celestial spectacles with others.

Tim has been a longtime advocate for dark skies, which are becoming increasingly rare. The Erskines feel the unpolluted skies of Sister Bay are an unappreciated treasure for Door County tourists and feel compelled to protect it. “These star parties are designed to create an awareness of something precious that every child should have preserved for them,” Holly explained.