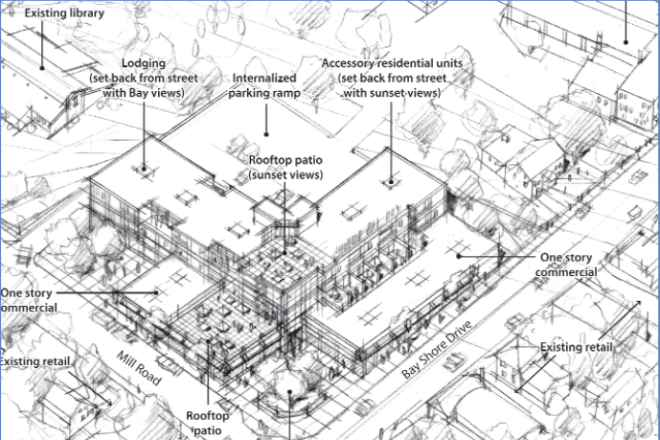 A concept drawing of the Braun property development that was included in the original economic development plan for Sister Bay in 2013.

Residents who attended the Jan. 5 meeting of the Sister Bay Economic Development Committee were asked to return to third grade. Using foam paper, colored pipe cleaners and glue, they colored up their vision for what Sister Bay should do to the “Braun property” on the corner of Bay Shore Drive and Mill Road.

While most groups of five opted for pencil drawings and lengthy discussion on the economic climate, there were some congruencies with each design plan. Ample public space, commercial spots designated for retail and a larger mixed-use building were frequently brought up for the empty lot.

“I have heard for years now of how we’ve got to reestablish downtown Sister Bay,” said a resident in the audience. “If we don’t take the opportunity to utilize this land in a retail sense with smaller shops, it’s not going to happen. This is the one shot that you’ve got of doing it. Any place else that you’re going to find and try to develop is going to be very expensive and is going to be off the beaten path.”

The primary question for the committee is how to subdivide the largest plot of land, should they choose to do so.

“There has been a fair period of time where everyone’s been looking for one big developer to come in and buy the property and put up a hotel, motel, or other things,” said committee chair Larry Gajda. “Up until this point in time, there really has not been anyone who has come forward.”

With a lack of a big developer to buy all of the land, the village is now considering breaking up the plots to smaller and more affordable sizes.

“We have one offer submitted on a prospective lot that would need to be carved out of the property,” said Zeke Jackson, village administrator. “That really put emphasis behind our conversation so this might be the way that things should go.”

An aerial view of Founder’s Square in Fish Creek was often referenced when drawing out plans for one of the groups. Setbacks from the road allowing for green space, parking in the back of the building and the consistent look of each shop throughout the block were among the highlights.

But seeking a consistent look collides with economic feasibility when looking to sell the property to developers or business owners. One large developer is likely to keep the same aesthetic throughout the development, but the village hasn’t found one yet. The price tag on so much land in a prime downtown location is expensive for any small business owner that would have trouble developing the site even if they could buy the plot.

But if the village does decide to break up the land into smaller lots, then the individual owner will get to decide how it looks and, apart from some building and zoning code, the structure doesn’t have to fit in to the buildings around it.

Committee members also felt the village would have more control of the individual businesses on the property if they sold to a single large developer rather than dozens of small business owners. One committee member pointed out that just because it would be great to have a fudge shop, dog wash, wine tasting room or shirt store doesn’t mean those businesses will take the bait and move in. With one large developer, the village could more easily communicate the kind of businesses it thinks would succeed in the space.

Immediately east of the Braun property on Mill Road is a space that, by rule of the Department of Transportation (DOT), must be used exclusively for parking. The DOT kicked in nearly $220,000 to purchase the property as part of the highway reconstruction, under the stipulation that it only be used for parking.

But the larger property, zoned for mixed use, is where the creative minds of the village can have their way with development.

“It has just come to light that someone has expressed an interest possibly in a motel on the property,” said Larry. “It’s a very recent development, just heard about it a few minutes ago. That being said, one doesn’t know if anything is going to come of it and to stop the process now and say we don’t want to move forward because of the possibility, I think would be counterproductive.”

So the committee will take all the recommendations from community members and meet on Jan. 14 at 4 pm to draft a vision that will draw on all the ideas gathered. Jackson said that with developers looking at the land in many different ways, the sooner the village can draw out its own vision for the property, the faster economic development will take hold of downtown Sister Bay.