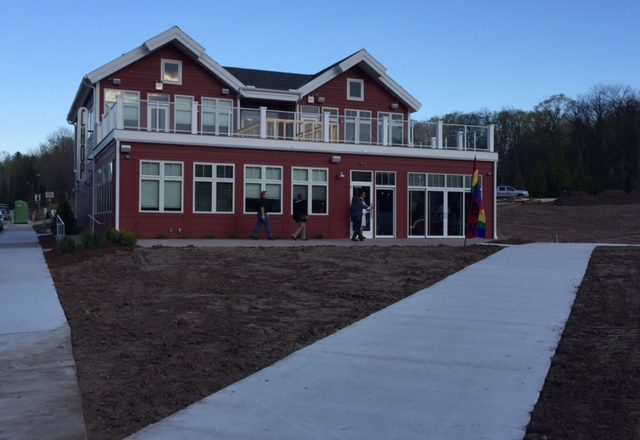 The new CHOP restaurant in Sister Bay was one of several new stores and restaurants that lead to a banner year for Sister Bay businesses. Photo by Myles Dannhausen Jr.

The Village of Sister Bay is not likely to pay back all of its debt within the Tax Increment Finance district before it expires, according to a village audit. This could lead to increases in property taxes and service rates for village residents.

“Right now we’re projecting that all of those funds will not be paid back,” said Amber Drewieske, Certified Public Accountant at Schenck. “That’s when we go back to talking about the additional amounts on the levy limit.”

The auditors recommended increasing the amount of debt used in calculating the levy limit, likely leading to an increased tax rate. The village is also considering increased rates at the marina and coordinating increased utility rates with upcoming utility infrastructure projects.

Most of the revenue within the TIF district since its inception in 2008 came from grants and another big portion came from land sales such as the Braun property lots. A $495,000 private donation to construct the performance pavilion on the beach is also included in TIF revenue. These revenue streams are inconsistent and not likely to continue.

“Based on the nature of our TID I don’t anticipate we will get any more [grant] money,” said Village Administrator Zeke Jackson.

The increment struggled in its first few years partly due to the 2008 financial crisis, but also because the village acquired many highly assessed private properties, removing them from tax rolls.

In 2007, the Village purchased the Helm’s Four Seasons property to expand the beach for $4.9 million. In 2010, the village spent another $5 million on the waterfront property previously part of Al Johnson’s Restaurant and Butik.

“Right now, your TID has no cash,” said Drewieske, noting that the TID fund balance is at -$379,475. “So your TID is borrowing from the general fund or the capital projects.”

Most recently, the village transferred a little more than $1 million from the CIP fund into the TID, leaving the CIP fund with around $200,000 in cash. The CIP fund pays for large village projects and, although most major projects are completed, Drewieske urged the village to keep that low CIP balance in mind should a large project unexpectedly surface.

Village President Dave Lineau said the village has used those funds with discretion, confident that with most of the big projects already in place, they can rebuild that fund to meet the 25 percent policy.

“A 15 percent fund balance might be ok for some municipalities depending on what your future outlook is,” said Drewieske. “You have to look and forecast down the road what’s going to happen.”

Between the depressed CIP fund, unassigned fund balance that doesn’t meet village policy, and a TID fund that is not expected to reap gains by its expiration, village officials were advised to be stricter in its use of funds.

“Spending and policies need to drive growth,” said Tasha Rass, Finance Director for the village. “When we are deciding whether to spend money we have to ask…does this drive growth and if not, is this an absolute necessity?”

During committee reports, Jackson and Rass recommended the Fire Board hold off on purchasing a new brush truck. Jackson also said the village should continue using older equipment as long as it’s functional before looking for replacements.

Village officials are optimistic about future development and Drewieske echoed that optimism.

“You’ve got some great things going on down there,” said Drewieske, but she emphasized the ticking clock. “You have 10 years left on the increment and then [remaining debt] goes back on the tax roll.”

While land sales are not a consistent payment structure to lean on, the sale of village-owned land for purposes of development is the primary way in which the village can start digging itself out of the TID debt.

“I think a big part of the TID that we’ll get into is you have some opportunity for land sales,” said Drewieske. “You’re going to generate increment. The faster you can do that, the better off you’re going to be in the long run to pay back some of this advance.”

The village still owns most of the lots on the Braun property but expects to sell at least five of the lots within the year. The village also purchased the quarry property behind Shopko in 2016. Additional revenue will come from payments from Keith Garot for the Stony Ridge development and Al Gokey for his projects on Mill Road and the former Sister Bay School property as those projects move forward.

Jackson said after crunching the numbers that the village would need to build $70 million in net new construction this year and then receive property tax payments on that until the expiration of the TID to pay it off.

“That’s not going to happen,” said Jackson. “I’d like to see $10 million per year of new construction and that’s not out of the realm of possibility. It’s lofty, but that’s something, if we committed financial resources and staff resources, we could achieve. No, we wouldn’t get back all $8.8 million but maybe we would get back $5 million.”

Between most of the big projects that are slated for this year, the village could see new construction of around $14 million for 2017, exceeding Jackson’s $10 million goal.

Jackson listed the developments that have been completed or are expected to begin this year. They include:

But any new construction will not be applied to the tax roll until the following year, and with the TID deadline approaching, the village is incentivized to get walls and roofs up as quickly as possible. On some of the village’s larger residential projects such as Stony Ridge and Harbor View Estates, delays have pushed millions of dollars of new construction value, and thus property tax increment off for years.

Next week, the Pulse explores some of Sister Bay’s delayed projects and how that affects the TID, while shining a light on the Braun property, which is currently on track for major development within the year.