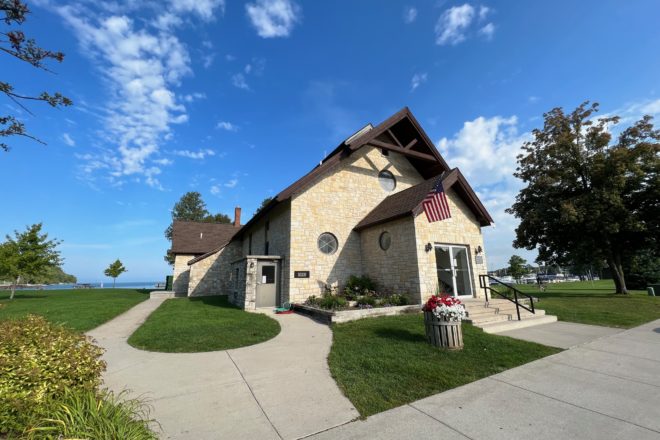 The Sister Bay Village Hall has been a hot topic since the village’s plan commission recommended its removal in August. Photo by Myles Dannhausen Jr.

In August, it appeared that the Sister Bay Village Hall might be on its last legs, but after two public-input sessions and new consideration by the village’s Parks and Properties Committee, sentiment among village officials has shifted.

Almost 50 people showed up for an in-person input session Sept. 6, forming a crowd that was almost unanimously in favor of preserving the structure that stands in the center of Waterfront Park.

The outpouring of feedback in support of keeping the village hall led the village’s parks committee, at its Sept. 21 meeting, to recommend the village form an ad hoc committee to research possible improvements to the hall and make a recommendation to the board. The committee would be made up of a combination of board members and citizens.

Committee member and village trustee Denise Bhirdo said the committee should have clear guidelines about what is expected from them.

“Any changes we make to it must be compliant with the zoning code,” she said. “And we must address the HVAC, the basement, accessibility and mold issues.”

She also suggested that expanded bathrooms be part of the plan to meet the needs of Waterfront Park and the marina.

Complying with the zoning code means the capacity of the building may not increase, because if it does, it loses its grandfathered status as a noncorming use as an assembly hall in a zoning district that does not allow assembly halls.

The building also lacks the parking required by the zoning code for a hall of its size. Administrator Julie Schmelzer said the capacity of the building is about 154 people without tables and chairs, which would require 51 – 60 parking spaces, depending on staffing needs, according to village code.

The village hall has been an on-again, off-again topic of discussion for at least 15 years.

“For some, this whole issue of the village hall has been going on for years; for others, it’s new,” said village president and committee chair Rob Zoschke. He also implored residents who are expressing concern to join the plan commission, which has a citizen opening to fill.

Problems with the elevator, basement flooding, mold, the configuration of the building and diminishing use have sparked conversations about the future of the structure at the committee and board levels. Its future came to the forefront this summer as new village administrator Julie Schmelzer began the process of updating outdated community plans to apply for grants.

“The village is working on its outdoor recreation plan, including the Wiltse property and Waterfront Park,” she told attendees during the Sept. 6 meeting.

With costly maintenance issues to grapple with, including the elevator and flooding, the village has been stuck in limbo with the property.

“Do we spend money to take care of those problems or not?” Schmelzer told attendees at the Sept. 6 meeting. “That’s why we’re having these discussions.”

Schmelzer and parks committee members said that although revenue isn’t a driving factor in discussions, it is something the village must consider. Electricity, insurance and fuel oil for the building cost the village between $9,000 and $13,000 per year, yet the building is expected to bring in only about $1,890 in rental income in 2023.

Reaction from attendees during both the in-person input session and a separate Zoom input session held Aug. 30 overwhelmingly supported saving the village hall.

“It’s a terrible idea to tear this down,” said David Watkins. “How could anybody think this is a good idea?”

Jenny Sitte said she favors keeping the hall because it’s one of the older buildings in the center of the village.

“We need to remember what Sister Bay looked like in 2007,” she said, referring to the wave of development that has come during the years since the waterfront expansion. “Now people are trying to cling to what we have, and that is what is left.”

Sitte was among several attendees who said they wished the village could discuss the hall with cost estimates in hand.

There is less consensus about what comes next for the structure. Some in the audience urged the village to investigate alternative uses for the building, such as a visitor center, museum or wedding venue, but others want to keep it as is, including Nancy Akerly.

“I can’t get into it anymore,” she said. “The elevator has been a joke for 20 years. But I don’t want to remodel it. I don’t want glass. I want to restore it.”

This summer, the village’s plan commission had suggested replacing it with a structure with lots of glass to open up the view, and several past discussions have included opening up the back of the building that faces the water with large windows to provide views of the waterfront.

Only one attendee spoke against the rehabilitation or reuse of the village hall. Bjorn Johnson, attorney for Al Johnson’s restaurant, said he shared the nostalgia for the building, but as the only abutting property owners, he said the position of Al Johnson’s owners comes from a concern about parking.

“Our practical parking concerns outweigh keeping the village hall in its current position,” he said to groans from the room. “Increase in use of the hall would fall on our properties, would force us to enact a stricter use of our parking. We don’t support renovations, enhancements, replacements, restorations, enhanced functionality, upgrades, expansion or especially increases in use. If those are in the plans, then we have to take the position of being against. We can’t take the burden of increased parking. It’s not that it shouldn’t exist somewhere else in the village. But just that this shouldn’t continue in its current location without a parking plan.”

Many in the crowd bemoaned what the village has lost since 2007, but Sharon Dorsching, who was chair of the village’s ad hoc Waterfront Planning Committee and long a proponent for keeping the village hall, tried to remind attendees of the positives that have come in the years since – and not least, the 1,800 feet of public waterfront.

“We have two identities,” she said. “We have local people invested year-round, and a tourism economy. Anything we do that is commercial is as good as things we do for people who are here year-round. Whatever we invest in the village hall is one of those things that drives tourism and is good for the local residents.”

She also applauded the work of local business owners who have restored and maintained some of the village’s oldest structures, including the Sister Bay Bowl, Husby’s and On Deck.

During its Sept. 21 meeting, the Parks and Properties Committee also forwarded a recommendation to the board that the parks and maintenance building located on Mill Road (formerly the fire station) be removed and a new building be constructed to house those facilities on property that the village owns near the Sister Bay Sports Complex.

For many years, village officials have talked about using that property for parking – a notion supported by many in attendance at the Sept. 6 input session.

“Get rid of that building and put in parking,” Jerry Knutson said.

Aug. 17, 1941 Village Hall is dedicated with a 300-seat auditorium. Gilbert Anderson and John Landstrom lay native stone with help from boys from the National Youth Administration. Walls are constructed of knotty pine from Roeser Lumber Company. Elmer Carlson drills the well; Clarence Brodd installs the wiring; Edwin and Elmer Jacobson complete the painting and decorating; and the women’s club furnishes the kitchen. The village library is housed in a 20-foot-by-20-foot “L” to the side of the building. W.A. Zachow of Fish Creek does the plumbing, and stone comes from the Frank Oldenburg quarry.

1981 A fire severely damages the hall, and subsequent repairs to the roofline change the exterior look of the building.

2003 An effort to get the building placed on the National Register of Historic Places is rejected because of the changes made after the 1981 fire.

2007 Early versions of the Sister Bay Waterfront Master Plan suggest razing or moving the village hall and post office to other locations to open more of the waterfront.