A fleet of tall ships will dock in Sturgeon Bay this month, and although it won’t be obvious from shore, one will stand out from the rest.

It’s the STV Unicorn, a schooner with 96-foot masts that does more than just impress land-bound onlookers. The Unicorn is home to the Sisters Under Sail program, which teaches teenaged girls how to sail and become confident, empowered women.

“I’ve never known a more beautiful natural metaphor than going to sea – especially on an authentically rigged tall ship,” said Sisters Under Sail founder Dawn Santamaria. “Nothing is automated, except for my anchor. Everything else is done purely by leveraging our strengths together.” 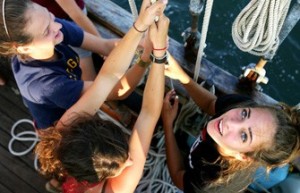 Santamaria started Sisters Under Sail in 2005. It’s a nonprofit organization that targets teenage girls with leadership potential and offers scholarships to more than half of them. The girls are on board for a week and learn how to run a tall ship.

While on board, Santamaria and the all-female crew try to help each girl find a task she does well, such as navigating, climbing the rigging or working in the engine room. Developing those strengths gives the sailors confidence and teaches them about what skills they bring to a team.

Once the sailors get on the boat, Santamaria said it’s easy to forget there are no men aboard. After a week of learning to sail and building each other’s strengths the girls discuss what it’s like to power a tall ship with an all-female crew.

“We’re the ones who are doing everything,” Santamaria said. “We’re the ones in the engine room fixing broken heads, transferring fuel, setting the sails and dealing with storms. It’s a community and when we are able to successfully reach our destination as women, it really is empowering.”

Once the girls get on board, there’s no way to know what they’ll meet out on the water, something Santamaria said helps the sailors learn about preparing for life’s unpredictability.

“Once you cast your dock lines off and set yourself out to sea, you never know what you’re going to get,” she said. “There are just all of these variables when you’re out at sea. Although you can lay down your best plan and hope it all works out that way, nine times out of 10 it just doesn’t, and from a programming standpoint that’s what I love because it gives you so much real life material to bring to the forefront for these kids. It’s just a beautiful metaphor to teach kids about life.”

Brianna Thom, a 15-year-old from Green Bay, will be getting aboard The Unicorn in Green Bay for her third trip with Sisters Under Sail.

“I just like the program and how it is an all-girl community and there are no pressures of acting a certain way around guys,” Thom said. “You can just be yourself, there’s no pressure. Everyone is from a different part of the U.S. so it’s nice to not have to have the same pressure of what school is like.”

Thom will sail to Ontario, Canada. Her favorite task is climbing the rigging and setting the sails, but likes that the community on board the ship is safe, so she feels comfortable asking questions about the other tasks.

Outside of learning about sailing, Thom said she learned a lot about getting along with other girls while on board The Unicorn.

Santamaria started the Sisters Under Sail program after seeing how sailing helped her own daughters turn into confident, strong women. They had grown up around The Unicorn, spending summers at tall ship festivals with Santamaria and her husband.

The Unicorn was built in Holland in 1947 after World War II. It’s made of German U-boat steel, and originally named Eenhoorn (Dutch for “one horn”) by its original owners. Santamaria said her husband is the true sailor in the family and owning a tall ship was his dream.

“I come at this from the programmatic, passionate part of it,” Santamaria said. “I think if we raise confident, strong daughters that the world will be a better place because everybody’s contributing… [They’ll be] able to have strong values and confidence and know what you want and not be afraid to ask and go for what you want. These are things that I think make an impact on the world going forward.”