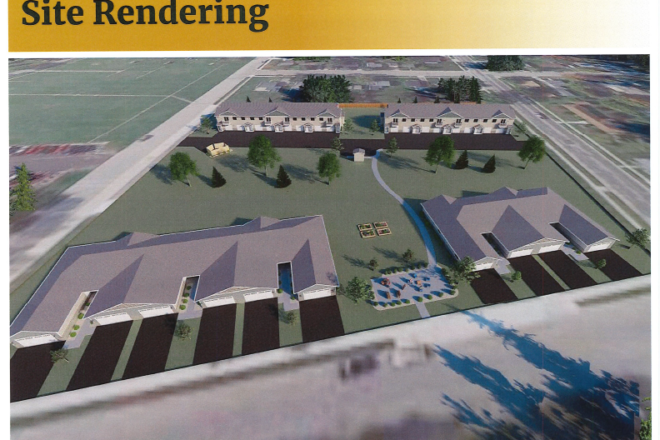 This rendering shows how S.C. Swiderski plans to develop the site of the former Sunset School with four buildings and a total 26 apartment units. Source: City of Sturgeon Bay.

A site plan to develop the former Sunset School property into a multifamily development with 26 units received backing last week from Sturgeon Bay’s Aesthetic Design and Site Plan Review Board.

The Sturgeon Bay Common Council had previously approved a planned-unit development for the site so that S.C. Swiderski could develop two eight-unit, two-story buildings with attached garages between Erie Street and Delaware Street, as well as four- and six-unit single-story attached buildings along North 8th Avenue.

Kortni Wolf, business-development manager for S.C. Swiderski, said the development, to be known as SCS Sunset Estates, will feature two different building types, along with a community area; and have two entryways: one on Delaware Street and the other on Erie Street.

“We have private entrances, and our rent rates are very inclusive,” she said. “We also have ample parking on the site.”

Jacqui McElroy, the company’s director of business development, said the rent will be based on market rates, with specific prices to be released 90 days before the apartments open for occupancy.

Tenants will pay for electricity, but McElroy said the monthly rent will include heat.

“Our hydronic heating system is very efficient, so that is one reason that we use it,” she said. “We pay for the heat because we want to use that certain system instead of the forced air. It’s more efficient.”

McElroy said wall units will be used for air conditioning.

Instead of remodeling the existing school building for apartment use, as is now being done at the former West Side School, the project plans call for demolishing the former Sunset School and constructing four new buildings.

McElroy said demolition work should begin in about a month, with the company now working with the city on how best to handle asbestos abatement for the existing building.

She said a groundbreaking is planned for late this summer, after the existing building is demolished, with plans for the project to be completed next April.