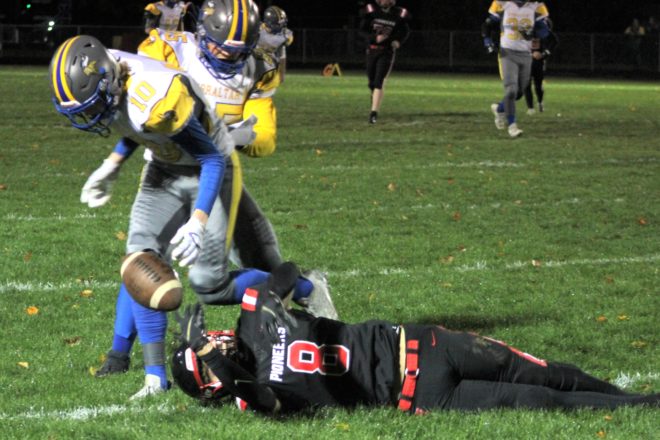 Sevastopol’s Logan Retzlaff (8) was unable to secure the ball on this pass play while being covered by Gibraltar’s Braden Sitte (10) and Jack Duffy (85) in the Oct. 14 regular-season finale at Pioneer Stadium. File Photo by Kevin Boneske.

Two players from this season’s Peninsula Conference-champion Gibraltar eight-player football team, which went undefeated in league play at 7-0, have been named to the All-Conference first team on both sides of the ball.

Vikings senior Jack Duffy is a first-team selection as both an offensive and defensive lineman, while junior Braden Sitte was named to the first team as a placekicker and defensive back.

Sitte also made the second team as an offensive end.

Other Gibraltar players receiving first-team honors include junior Marshall Maltby at linebacker and senior Giuseppe Mercier as a defensive lineman.

Mercier also made the second team as a running back, while Maltby received honorable mention as an offensive lineman.

Other second-team selections for Gibraltar include sophomore quarterback Brady Kita, whose season was cut short by injury, and senior offensive lineman Emmett Moroney.

The Vikings had two other players receive honorable mention – sophomore defensive back William Lecy and senior defensive lineman Will Friedenfels, whose season also ended early because of injury.

Retzlaff also made the second team as a offensive end, defensive back and placekicker, while Andreae received honorable mention as a running back.

Two seniors from Lena/St. Thomas Aquinas, which placed runner-up to Gibraltar in the conference and then gave the Vikings their only loss in the opening round of the eight-player football playoffs, are the league’s respective offensive and defensive players of the year – running back Sam Marquardt and linebacker Josh Kristof.