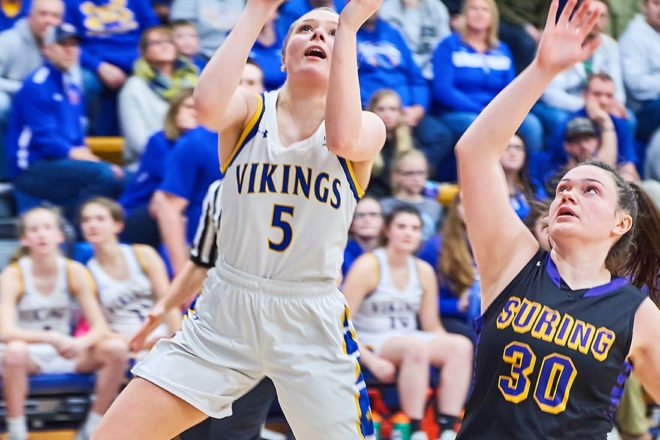 Gibraltar needed Abbi Sitte to step into big shoes this season, but even her coaches couldn’t have foreseen how quickly she’d grow into – and out of – them.

All that Sitte, a senior point guard, did was lead the Vikings in scoring (16.6 points per game), rebounding (6.0), assists (4.4) and steals (4.6). Sitte led the Packerland Conference in assists and steals and was also the second-leading scorer behind conference Player of the Year Mackenzie Tlachac from Kewaunee. Sitte also leaves Gibraltar as its all-time leader in steals and assists, fifth in points, sixth in rebounds and tied for ninth in blocks.

Head Coach Devin Thomas was effusive about Sitte’s season, and so were the other conference coaches who named her unanimous All-Conference along with Tlachac and Southern Door’s Nicole Norton.

“I thought no one in the conference deserved to be a unanimous selection more than Abbi,” Thomas said. “She proved in conference play that she was one of the best players.”

Sitte said she knew her team would lean on her to make up for losses from last year’s 16-7 team. Thomas also was in his first season, replacing longtime coach Josh Kropuenske.

“I knew coming into the season it was going to be a big change being the only returning starter,” Sitte said. “I really started to push myself in summer basketball, and I started to gain confidence with every aspect of my game. It’s a pretty fulfilling feeling being able to hear that the other coaches recognize all the effort I’ve put into the game.”

Sitte’s biggest impact came in Packerland games. The Vikings were 11-2 in games in which Sitte was at full strength and 0-3 when she missed a game or played limited minutes due to a bruised quadricep. The Vikings finished second to 16-0 Kewaunee in the conference standings.

“I think the biggest step up was seeing how much faith my team and coaches had in me,” Sitte said. “It really pushed me to believe that I could accomplish my best season yet.”

Norton was the third-leading scorer in the Packerland at 16.5 per game and added 4.2 rebounds per outing. Norton scored in double figures in each game but one, and she scored a season-high 28 points in a win over Oconto. Norton averaged 12.8 points during the last two seasons.

“It was a great accomplishment for Nicole to make the first team,” said Southern Door coach Jason Shimon. “She works so hard on the court and in the weight room, which paid off with this accomplishment.”