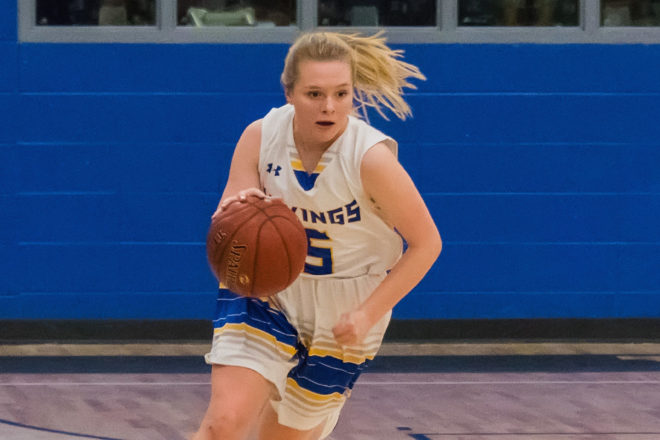 First-year Gibraltar girls basketball coach Devin Thomas was counting on the leadership of Abbi Sitte heading into the season. She hasn’t disappointed him.

The senior point guard leads Gibraltar in three categories, helping the Vikings to a 3-2 early-season start as of press time on Dec. 20. Sitte leads the Vikings in scoring at 16.2 points per game, with rebounding at 6.2 and assists at 4.2.

“I knew that for us to be successful, she was going to be one of the main pieces,” Thomas said. “What has been a little shocking has been her ability to score in the lane and with her mid-range shot. Abbi has always been such an unselfish player who could create for her teammates. She rebounds especially well for her size. Ultimately, her leading us in most categories isn’t that surprising.”

Supporting Sitte in scoring is junior Sage Krause, who is scoring 15.6 points per game after scoring 5.6 per outing last season. Krause leads the Vikings with 20 three-pointers. Nina Sitte and Sophia Alexander both grab 3.8 rebounds per game, and Maggie Moroney chips in 5.6 points per outing.

“Coming into the year, we were expecting Sage to have a big year,” Thomas said. “She has a pure shot and is one of the best shooters on the team. Now that she is a starter, she has more opportunities, and we look for her to provide offense. When Sage starts to drive and get into the defense, she becomes a difficult player to defend because of how well she shoots from the outside.”

The Pioneers are off to a 1-4 start overall and 0-3 in the Packerland. After scoring only 18 points in a season-opening loss to Two Rivers, the Pioneers have averaged nearly 40 points per outing, including a season-high 48 points in a win over St. Thomas Aquinas.

Zoe Kuehn leads Sevastopol in scoring and rebounding at 14.3 and 8.3 per game, respectively. Bailey Rikkola averages 9.3 points and 6 rebounds per game, and Emma Stueber adds 7.0 points and 4.3 rebounds per outing.

“We have a young, inexperienced team with very few girls who have varsity game experience before this year, so our speed of the game on our passes and cuts and moves to the basket is lagging,” Coach Ben Rikkola said. “They want to get better, but it’s a process. And each game is an opportunity to gain more experience and confidence. So we are still figuring out the game and how and where everyone on the team can be used best.”

Balance has been the key to the Eagles’ 4-2 start, with four players averaging double figures in scoring.

Nicole Norton paces the Eagles with 19.8 points per game. Chloe LaCrosse (11.5), Hailey Shimon (10.8) and Kendra Dantoin (10.3) round out the list of double-figure scorers. LaCrosse is the leading rebounder at 7.8 per game, and Dantoin adds 6.7.

“I’m not surprised – but excited – by their production,” Coach Jason Shimon said. “I see what they are capable of every day in practice, and with the freedom our offense provides, we don’t have to rely on one player.

“Things our team needs to do better to continue our success this year are limiting our turnovers and rebounding and holding our opponents to one shot,” Shimon added.

The Clippers are 3-5 overall and 2-2 in the Packerland, including a win over league leader Green Bay NEW Lutheran/Providence Academy.

“The NEW game was a great game for us. Our defense was fantastic, and our offense did a great job of not turning the ball over against their pressure defense,” Coach Erik Tauschek said. “We were able to get a lot of shots up, and thankfully, we made just enough for the win. The girls were very proud of the win, and we are hopeful it’s a trend that will continue.”

Sarah Bridenhagen leads the Clippers in scoring at 13.1 per game, and Carley Wodack is next at 6.7 per outing. Wodack is the leading rebounder at 6.3, and Morgan Reinhardt adds 5.4 a game.

“We are playing good team basketball,” Tauschek said. “Our defense is very strong, and we have been able to hold opponents to difficult shots. An area we need to improve on is scoring and finishing the basketball around the rim. The last few weeks, we have really struggled to score the ball consistently. If we can figure out a way to do that, we should hopefully get a few more wins in the next few weeks.”