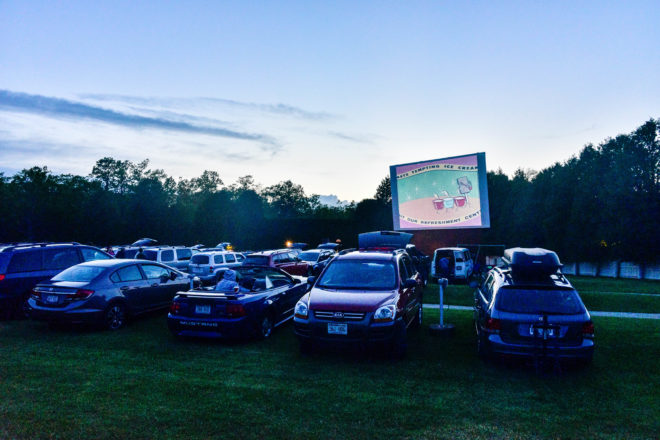 The Skyway Drive-In Theater on Highway 42 in Fish Creek. Photo by Len Villano.

What can you say about a 65-year-old business that’s outlasted nearly every other one of its kind and is still going strong? The words Trip Advisor used last July were, “Door County’s Skyway Drive-in Theater is the number one drive-in in the United States.”

The theater’s history was the topic of “Gibraltar Talks” at a meeting of the Fish Creek Historical Association. It was presented by Kinga Jacobson, whose husband, Jeff, and his brother, Dale, are just the third pair to own Skyway.

It was the first drive-in in Door County when Orville and Elton Voeks, who had built the Lake Theater in Baileys Harbor after WWII, opened the new outdoor theater on July 26, 1950. The first movie shown was Mrs. Mike, the story of a Royal Mountie in the Canadian Arctic, starring Dick Powell and Evelyn Keyes. 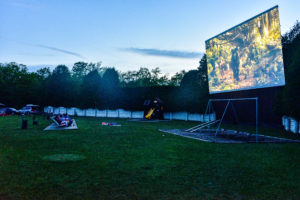 Five years later, Elton sold his share of the business to his brother, who operated Skyway until 1981. The screen was 46’ x 50,’ the same as today. The Voeks showed foresight in building the screen to face the south, so a late-setting sun wouldn’t hit it. There was parking for 210 cars and sound for the movies came only from speakers on posts by each car. The orange, yellow and pink marquee they built is still in use.

Orville was committed to providing family entertainment with G and PG movies, a picnic area and a children’s playground. He also stressed that it was a great place for senior citizens, who could watch a movie without getting out of their cars. Admission was 69 cents (equivalent to about $4 today), except Thursdays, bargain nights, when a car with two people was admitted for $1. The movie changed three times a week.

Darrell “Wild Bill” and Eileen Jacobson bought the Skyway from Orville Voeks in 1981 and operated it for 18 years before selling it to their sons.

Kinga noted that running a drive-in involves a lot more than just showing a movie. Booking popular films is a top priority. There’s office work to be done and employees to hire. The grounds and bathrooms must be kept in immaculate order, something Skyway has always been complimented on. And finally, a good reputation has to be built and maintained.

Running a drive-in is never a 9-to-5 job. Kinga said owners typically work a full day at the theater, cleaning, stocking and maintaining the equipment and grounds, go home for dinner and return before dusk to stay until midnight or later.

She showed some of the old cartoon ads that encouraged moviegoers to visit the refreshment stand. The menu hasn’t varied much over the years. Hamburgers are gone, but foot-long hot dogs, pizza, nachos and fresh popcorn with real butter are still popular. Several people in the audience commented there’s no other popcorn as good. 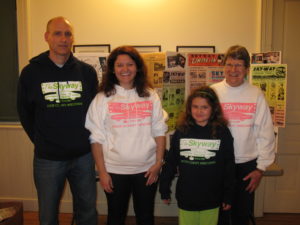 Jeff, Kinga, Krista and Eileen Jacobson, the family behind the operations at Skyway Drive-In Theatre in Fish Creek.

A memory that brought chuckles was the ’55 Chevy with a tank of mosquito spray that used to drive up and down the aisles. Kinga also mentioned that the 35-mm films that were used for years played for just 20 minutes a reel. Someone had to watch constantly so the second projector could be switched on with minimal interruption. There were often film breaks, too, that brought the movie to a stuttering halt until they were repaired. John Henderson, Jeff Berg and Todd Voeks were among the projectionists who kept the movies rolling.

That changed in 2013, when a new digital projector was installed, a necessity for showing new films. This change was expensive and contributed to the closing of many drive-ins. Now that everything is computerized, a problem with a film can be solved with a phone call to an always-available technician.

Some things, though, never change – dead car batteries, flat tires and, occasionally, sneaky teenagers. Orville Voeks used to tell stories about kids who hid in the trunk or under a blanket in the back seat, just to see if they could outsmart him. If he found them, they cheerfully paid double the admission price.

Orville was very careful that his theater never became known as a “passion pit.” If he thought a poster that came with a film was a bit risqué, he used a black marker to cover the offending areas.

During the 1980s, the Jacobsons added two more rows of parking spots, bringing the capacity to the present 280 cars, and AM radio sound was added to the speakers. FM sound came along in 1998 and high-quality sound a decade later. Many people now choose to listen on their car radios, but the ubiquitous outside speakers are still in operation.

Since the Jacobson family bought Skyway in 1981, 962 movies have been shown, an average of 27 per year from Memorial Day to Labor Day. The theater is also open several weekends before and after those dates. They still maintain the Voeks’ tradition of showing mostly G, PG and PG-13 films, with an occasional R for the second feature. Among the most popular through the years have been 101 Dalmations, True Grit, E.T. the Extra-Terrestrial, Despicable Me, The Lion King and Pirates of the Caribbean, the all-time favorite. The price is $8 for ages 12 and above; $5 for ages 5-11; no charge for children four and younger. 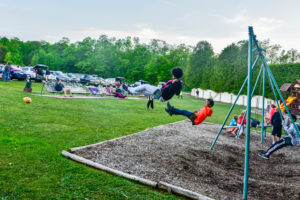 When Skyway opened in 1950, there were 75 drive-in theaters in Wisconsin. Now there are just nine, and Skyway holds the record for the longest uninterrupted operation. Since it’s been recognized as the best of its kind, who knows, we may be watching movies there for another 65 years.

Check doorcountydrivein.com for showings. Entry gate opens at 7:45 pm, and the first show begins at about 8:45 – or whenever it gets dark.