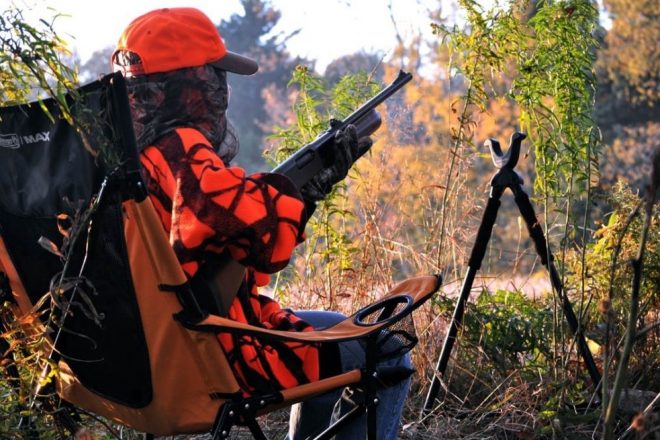 During hunting season, blaze orange means “human,” so be sure to wear bright and/or reflective clothing when you’re on the trails. This is doubly important for any dogs that accompany you. Photo by Kevin Naze.

Wisconsin’s gun deer hunt season concluded with Door County the site of two of the six gun-related accidents that took place across the state between Nov. 20 and 28.

The first of those local accidents happened on private land when a 40-year-old male placed his hand on the muzzle of his rifle after he had cocked the hammer and accidentally pulled the trigger, striking his left pinky, according to the hunting incident summary report from the Wisconsin Department of Natural Resources (DNR).

The second involved a 45-year-old Nasewaupee man who had been hunting deer from his residence. When he attempted to unload his firearm, it discharged inside the house and wounded a 10-year-old boy in the leg. In Iron County, a 65-year-old male was hunting with a rifle when he moved and knocked over his firearm, causing it to hit the ground and discharge, striking another 65-year-old male in the chest. The man died from that wound.

The Door County Sheriff’s Office led the investigation on the Nasewaupee incident, and Chief Deputy Pat McCarty said no charges were filed against the man because the shooting was accidental and there were no violations.

“There’s nothing in state law that prohibits hunting from out of the house,” said Marcus Medina, one of the DNR recreation wardens who covers Door County.

The DNR enforces state law, not local ordinances, and “local municipalities do have the ability to prohibit the discharge of firearms,” Medina said, though the Town of Nasewaupee is not one of those.

But the end of the accident-free run and the continuation of accidents this year doesn’t mean the peninsula is beckoning a higher number of unskilled hunters, according to Jon King, DNR hunter-education administrator and conservation warden.

“There is no trend that says one county is always going to have one [accident],” King said. “It goes in spurts. There’s no one county that we have to do some work in.”

His department instead distributes statewide news releases and messaging to reach as many hunters as possible with a goal of reducing the potential for accidents, injuries and fatalities. The next year’s educational focus depends on the accidents that occur during the current year.

“When we look at hunting accidents, we look at what causes them, and that’s how we address our hunter-education community,” King said. “We learn from our mistakes.”

What happened this year, he said, was a higher-than-normal number of self-inflicted wounds. In addition to the one in Door County, a 30-year-old male hunting on private land in Waukesha County was in a tree stand when he tried to hang the gun on a hanger and the gun discharged, striking him in the leg. In Marathon County, a 65-year-old male was loading a pistol when his finger slipped off the hammer, causing the gun to fire, striking him in the left ankle. No details were captured on how a 57-year-old male hunting in Juneau County shot himself in the leg.

A higher proportion of hunting accidents take place during the deer gun season. This year’s six are on par with the five-year average. Overall, there have been 10 hunting-related accidents since the beginning of the year, a downward trend over a five-year average, King said.

Ongoing refreshers on the four basic rules of firearm safety are important year-round, King said – not just during the deer hunt season. Those rules are: Treat every firearm as if it’s loaded; always point the muzzle in a safe direction; be certain of your target and what’s beyond it; and keep your fingers outside the trigger guard until you’re ready to shoot.

“It’s not just important to know what the rule is; it’s putting it into practice all year long whenever you’re using a firearm,” King said.