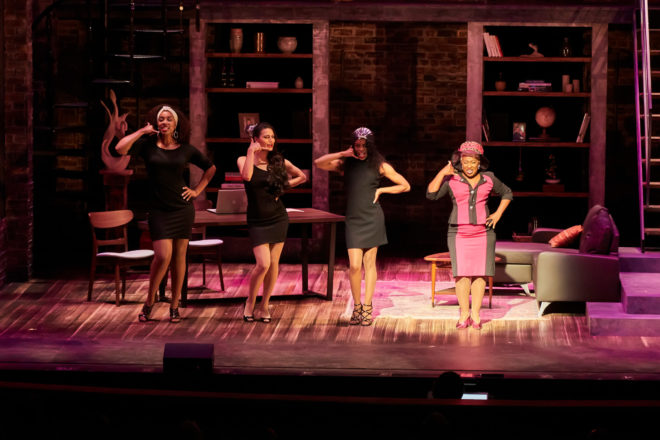 Oda Mae Brown (right) has big plans for her future in “Ghost The Musical.” Submitted.

Being an ’80s baby, I’m a member of the generation that remembers (at least vaguely) the buzz created by the 1990 fantasy-romance film Ghost, starring Patrick Swayze, Demi Moore and Whoopi Goldberg. Despite its mediocre reviews, the film grossed $505 million-plus, with a budget of $22 million, making it the highest-grossing movie of the year.

The surprise success could be attributed to the combination of star power (Swayze had just made a name for himself in Dirty Dancing), humor (Goldberg’s performance was nominated for an Academy Award and a Golden Globe) and one unforgettable pottery scene (the pottery-wheel straddle paired with “Unchained Melody” will forever be parodied). Additionally, the movie had broad appeal, somehow combining romance, comedy, crime and supernatural elements that offered something for nearly every viewer.

The movie was translated to the musical stage in 2011, and the musical is now being performed at Peninsula Players in Fish Creek through August 18. My first question was, how would this story translate to a musical format? And my second was, could the actor playing Sam Wheat live up to Swayze standards? Here are six memorable moments that answer those questions.

The Peninsula Players’ theater and surrounding acreage are always stunning, but the set was just as impressive during this production. In creating the couple’s apartment, a subway station, a busy New York street and a few more scenes, the set’s flexibility and the movement of scenic props added to, rather than distracted from, the visual experience.

This was first apparent in the musical number “More,” during which the cast marched around the space and effectively brought a New York City daily commute to life, complete with a crowded subway car. The musical aspect of the production takes a little time to get into, but with this number, it started clicking.

I recalled from the film that the pottery scene did an excellent job creating chemistry between Molly and Sam, but I did forget that the Righteous Brothers song “Unchained Melody” played a central role in selling the steamy romance. Hearing it during the various heart-wrenching moments of the musical reminded me that it is still a hauntingly moving and beautiful song. Molly, played by Ashley Lanyon, and Sam, played by Will Skrip, sounded effortlessly great together. By the last rendition, tears were summoned.

My concern about whether the lead actor, Skrip, could live up to the Swayze standard was put to rest midway through the first act, when he stepped fully into the ghost version of Sam Wheat. In the highly entertaining song “You Gotta Let Go Now,” Lee Palmer sings to Sam as a hospital ghost, explaining to Sam that he is indeed dead and trapped in transition. Somewhat disheveled and frantic, Skrip does an excellent job of selling Sam’s newly supernatural state. And between the costuming and perfectly coiffed hair, I think Skrip could actually be a Swayze body double.

Another plot element I had somewhat forgotten is just how funny it is. This is mostly thanks to the clairvoyant character Oda Mae, played by Alexis J. Roston, who brings an infusion of blunt banter and humorous straight talk, making the whole supernatural schtick much more palatable.

At first glance, the plot seems rather sci-fi, but thanks to Oda Mae, the abstract concept of the in-between world is brought down to earth, and Roston did a phenomenal job in the role. The audience meets her and her sidekicks – Clara (Eben K. Logan) and Louise (Camille Robinson) – in the song “Are You a Believer?,” when Oda Mae is using her claim to clairvoyance and flair for theatrics to make a few bucks. The trio sings, spins and pretends to “see” the deceased with so much energy and funk that the questionable authenticity of the reading is cast away.

In Act II, Oda Mae goes solo in “I’m Outta Here,” letting her spunkiness shine. Dressed in her Sunday best, she lets her swagger loose as she imagines what life will be like with a newly flush bank account. The playful interactions between Oda Mae and Sam, which sandwich this song, were some of my favorite moments.

The cast and crew pulled off a very dynamic and entertaining show. There were many more moments that packed punches, but you’ll have to go see them for yourself. Tickets and other details are available at peninsulaplayers.com or by calling the box office at 920.868.3287.