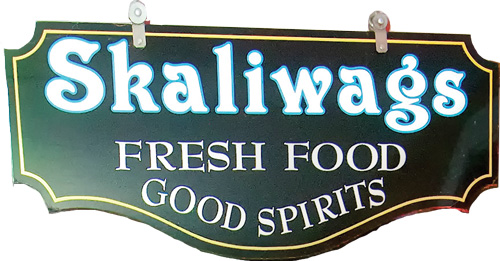 When you walk through the entryway of Skaliwags, the scene before you might seem unimpressive at first. The restaurant is tiny, five tables and a bar, and the cooks occupy a kitchen in plain view that consists of a grill, a flat top, and little-to-no prep space. But linger long enough to taste the food and be welcomed by Chef Chris Wiltfang, and you’ll discover why Skaliwags is one of the hottest foodie destinations in northeast Wisconsin. 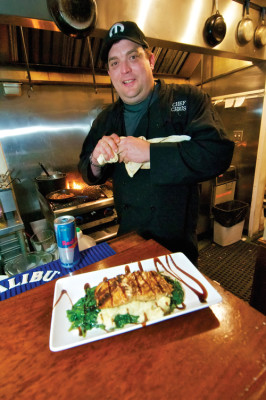 Hidden away on a side street in breezy Algoma, Skaliwags doesn’t have menus as such. Three blackboards list tantalizing specials such as Bayou Pasta (gator, shrimp, and Andouille sausage in a spicy Cajun red sauce), and the house soup (creamy she-crab bisque), and the restaurant’s signature dish – a grilled romaine salad topped with bacon and bleu cheese that redefines the genre. After you have a beverage, Wiltfang will saunter over with a rakish smile and ask:  “What do you feel like eating tonight?”

He can make any dish to order, mixing and matching from his trademark spicy pastas, grilled steaks and gigantic Russian scallops, ahi tuna, and sushi. For those who need a menu, he’ll pull out a slightly tattered legal pad filled with a list of more possibilities. And the possibilities are endless.

Wiltfang named the restaurant after a civil war term that referred to Southerners who sympathized with the north – reflective of his cross-cultural influences and his unlikely move to the Midwest.

“I grew up on an island in Georgia. Because of that I love to cook saltwater fish,” he says. But Wiltfang also honed his trade in the Florida Keys and at ski resorts out West. His cuisine reflects this diverse set of influences, and it changes with the seasons. Freshness is key to Wiltfang, who orders three times a week from select purveyors.

“This place is too small to keep anything for any period of time, so everything is fresh – that’s why there’s a revolving menu. One week we have fantastic asparagus, the next week it’s gone, and there’s something new.” 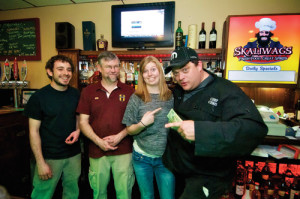 Wiltfang was convinced by his mother, the Reverend Gloria Butler of Algoma, to come to Wisconsin and start a restaurant a year ago in January. “It all happened faster than we thought it would,” he says. He packed up his belongings in Park City, Utah, picked up his daughter Alexa, and arrived in Algoma where he opened just weeks later.

Since opening in early 2011, Skaliwags has built a voraciously loyal following. The restaurant is full most nights, and Fridays and Saturdays can bring wait times of nearly two hours. Savvy diners come early or during the week, and they bring their friends.

Elisabeth Teskie of Sturgeon Bay loves the journey and destination that is Skaliwags. She and her husband gather a group of friends for a monthly trip in what they now call the “Skaliwagon.” 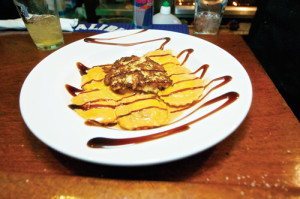 “It started with a birthday party,” says Teskie. “We piled as many people as we could into the back of the minivan. Once we even took a motor home and brought 11 people.”

“The food is five-star, but it’s such a relaxed setting,” she continues. “It’s a whole evening affair,

The show, of course, is watching Wiltfang and his staff interact with customers throughout the evening. Necks crane as the chef parades out a plate of steaming scallops atop garlic mashed potatoes, or a huge mouthwatering sushi platter. Waiter Perry Pollard regularly visits tables with a bottle of wine, to refill customers’ glasses and banter a bit in his southern accent. The atmosphere gets rowdier as the evening progresses and may end (as it did last time I was there) with a group of 40-something women celebrating a birthday, loudly with ‘80s music, at the bar.

“If you’re in a hurry, don’t come here. If you’re not, settle back with a glass of wine or a beer, and enjoy the show,” says regular customer Tim Nyberg, who also does graphic work for the restaurant. A self-described foodie, Nyberg says, “It’s unique what he’s doing. The food is great, and his personality is so engaging.”

One head of romaine lettuce

In a pan, sauté the bacon and onion until bacon is “90 percent done.” Deglaze pan with aged balsamic, then add a little more vinegar so there is some liquid in the pan.

Slice the head of romaine lengthwise, brush with olive oil and season with salt and pepper. Grill the romaine, cut side down, until lettuce is slightly wilted and there are some nice grill marks evident.

Plate the lettuce, top with crumbed blue cheese. Dress salad with warm vinegar from the pan and top with bacon/onion mixture.