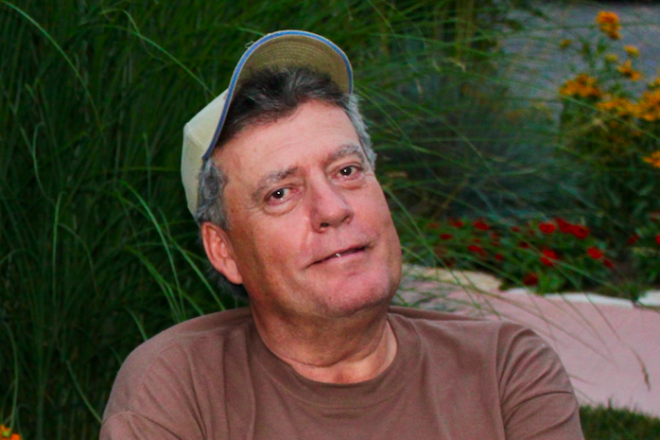 “Bonnie should be Server of the Week!” he said to the former Peninsula Pulse editor and co-owner.

Skip put pen to napkin and scribbled a poem on the spot:

She attends to the customers with class and style.
If you walk in and order you only wait a while.

She’s a box full of energy with a motor out of sight,
Stop in to Alexander’s – check her out for a bite!

With that, he was the Pulse’s new Server of the Week correspondent. But Skip had one condition: He wanted to expand the definition of server to include more than waitstaff and bartenders. He wanted to recognize people who serve Door County in larger ways as well: the nurses, school-bus drivers and volunteers who serve the community in other ways.

It was the perfect role for a guy who loved to meet people. And I mean really meet people.

“He was great at capturing the essence of the person in a short poem,” his wife Sue told me last week, a few days after Skip lost his battle with a rare form of cancer at age 73. “And it was a great excuse to get out.”

Not that Skip needed an excuse. He loved to make connections, even in his final days, when he spent his last ambulance ride to the hospital getting to know his EMT and ambulance driver.

He’d chat people up while making the rounds at the Coyote, Bley’s, AC Tap, Husby’s and Cornerstone Pub. Or as he cooked brats at West Jacksonport’s Door County League Baseball games. Or on the golf course in leagues at Maxwelton Braes or Peninsula State Park.

He could strike up a conversation with anyone, anywhere, and within minutes be talking like old friends. He loved sports, none more than basketball, the subject of our first meeting. He found out I coached high school basketball, and a couple hours and several beers later, I’m pretty sure he knew all of our plays and the strengths and weaknesses of all my players.

And he remembered it all. If you ran into him years later, he knew your name and what you did for a living. He might know your parents, too, or your grade school teacher. He soaked it all in.

Skip was born Russell Kaeske in 1946, but his older brother didn’t want a Russell. “He said he wanted a brother named Skip,” Sue said, and his parents obliged. Skip it would be.

By middle school, he knew what he would do with the rest of his life. He had a teacher who had made a strong impression on him, and that was enough. “I’m going to be a teacher,” he declared.

For 35 years, he taught English and social studies in the Milwaukee Public School System, and for 13 of those years, he also served on the school board in Whitnall, where his daughters, Chelsea and Marne, went to school. Later he served on the state’s licensing and standards committee, and after his 2003 retirement, he worked as a coach for new teachers. He kept learning, and he kept teaching.

In retirement, Skip and Sue moved to Door County, where he enmeshed himself in several organizations. He served on the board of the Fish Creek Community Church and as vice president and treasurer of Door County League Baseball, and he worked at Lautenbach’s Orchard Country Winery, where he loved giving tours to the tourists who came by the busful and judging the cherry-pit-spit contest dressed as a cherry. He entrenched himself in Door County League Baseball, running the brat stand at the field of dreams in West Jacksonport.

As his prognosis grew dire this fall, he told his wife and daughters that he didn’t want a pity party, no Skip farewell tour. He intended to write his own obituary but didn’t get to it. Maybe he wouldn’t want these few words of remembrance.

But Skip was a part of what makes this newspaper special. It has grown on the bricks of contributions large and small from writers and artists and photographers from all corners of this peninsula. Skip Kaeske was one of our favorites, honoring scores of people who served our community in ways that were and are often overlooked.

His daughter Chelsea Kaeske-Mittermann described him as “a guy that took care of everybody, a guy that shows up.”

Here’s to you, Skip. Thanks for showing up for us, and our community, in so many ways.

A memorial service to honor Skip Kaeske will be held Saturday, Nov. 23, 10:30 am, at the Community Church of Fish Creek, 9420 Cottage Row in Fish Creek, with Pastor Gary Scharrig officiating. A reception will follow the service at Alexander’s of Door County, 3667 Hwy 42 in Fish Creek. Skip will be laid to rest in Blossomberg Cemetery.

Because of his lifelong dedication to students of all ages, please consider a donation to an educational organization of your choice in lieu of flowers. Memorials to the family will be used to pay off the lunch accounts of students in need.