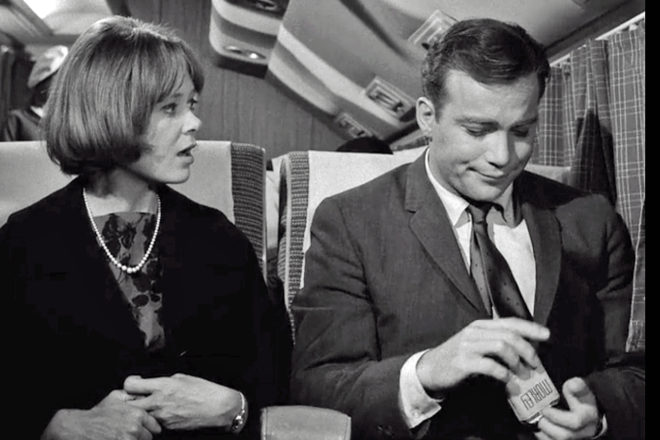 William Shatner’s character is about to light up a Morley cigarette before his flight takes off in the Richard Matheson-penned “Nightmare at 20,000 Feet,” The Twilight Zone episode that originally aired on Oct. 11, 1963.

Recently discovering the Guillermo del Toro-touched FX series The Strain, the film fan in me was amused watching episode 11 in the first season when a character flashed a pack of Morley cigarettes.

They’ve been the cinematic smoke of those in the know for more than half a century, but mention Morley cigarettes and you’ll find they are mostly known to fans of The X-Files because the sinister Cigarette Smoking Man was a Morley Man. For example, type “Morley cigarettes” into Google, and this is one of the headings that pops up (from ihorror.com): Did You Catch Last Night’s X-Files Homage on The Walking Dead?

The homage referred to is a character in The Walking Dead displaying the Smoking Man’s brand of cigarette.

Good for ihorror.com for catching the brand reference, but, ultimately, their response also shows a limited knowledge of horror and pop culture.

The appearance of Morleys in those two TV shows is really just a continuation of a long history of Morley cigarettes in TV and film that began with Alfred Hitchcock in his 1960 shocker Psycho.

Near the end of Psycho, a psychiatrist, played by Simon Oakland, is trotted out to explain Norman Bates’ sickness to the audience. During his monologue, Oakland extracts a cigarette from a pack of Morleys.

And so a fictional brand and in-joke was born.

Quite a few characters in The Twilight Zone were Morley smokers, including William Shatner in the famous “Nightmare at 20,000 Feet” episode, Jack Klugman in “In Praise of Pip,” and Telly Savalas in “Living Doll.”

Morley’s first physical TV appearance took place on Naked City, a series spun from Jules Dassin’s 1948 film noir The Naked City, which was shot in a then-new semi-documentary style. In an episode titled “Tombstone for a Derelict,” which aired on ABC on April 5, 1961, an unknown actor named Robert Redford offers a Morley cigarette to a bum just before his gang of ill-equipped reformists beat the bum to death.

Morley made its next TV appearance in a 1962 episode of The Dick Van Dyke Show, when Pickles, the rarely seen wife of Buddy Sorrell (Morey Amsterdam), gives Rob Petrie’s young son, Ritchie, a pack of chocolate Morley cigarettes.

The list goes on. Dean Martin as swinging hitman Matt Helm uses a Morley to kill an enemy in Murderers’ Row. Oliver Stone’s soldiers in Platoon smoke Morleys. You can find Morleys being smoked on television throughout the decades, including in Mission Impossible, Beverly Hills 90210, Buffy the Vampire Slayer, Frasier, Friends, That ’70s Show, 24, ER, Malcolm In the Middle, Lost, Weeds, Breaking Bad, Burn Notice, Californication, Justified and Shameless, to mention just a few of many small-screen Morley appearances.

Morley Lights were introduced to the world in a 2011 episode of American Horror Story and reappeared in a 2014 episode of The Walking Dead, the perfect cigarette for survivors of the zombie apocalypse who want less tar in their smokes.

One of the classic Morley appearances is in the Seinfeld episode “The Invitations,” the seventh season finale that aired on May 16, 1996, with George Costanza attempting to end his impending marriage by smoking in front of his anti-smoking fiancé. He pulls a soft pack of Morleys from his shirt pocket, lights up, and makes himself sick. It’s a great episode, and, incidentally, the last one written by co-creator Larry David until the series finale two years later.

It is easy to understand how The X-Files could be seen as the originator of the Morley brand, for it certainly featured Morley more than any previous show, and might have been the first to actually feature the brand in one episode, “Brand X” from season 7.

The most puzzling thing to me about Morley cigarettes is why didn’t Quentin Tarantino take to them? This is a guy who built a reputation paying homage to the vast film industry, but not when it comes to fake smokes. Red Apple is the ciggie of choice of his characters since Pulp Fiction.

There is one simple reason for a filmmaker to use a phony brand – the avoidance of product placement. Instead of licensing with Philip Morris to have a character smoke a Marlboro, it’s much easier to have the prop master come up with a pack of Morley or Red Apple.

In the case of the show that started this train of thought, The Strain, smoking – or the need for more cigarettes – was used as a plot device to endanger the characters, but the need to develop fake cigarette brands begs the question, why not just write characters who don’t smoke? (And, while you’re at it, how about writing characters who don’t eat and talk at the same time? There seems to be a lot more of that lately.)

By the way, if you would like your own pack of Morley, a New Zealand company called Magnoli Props is offering replicas “entirely hand made from scratch based on original props” for $26 each, minus the cigarettes.