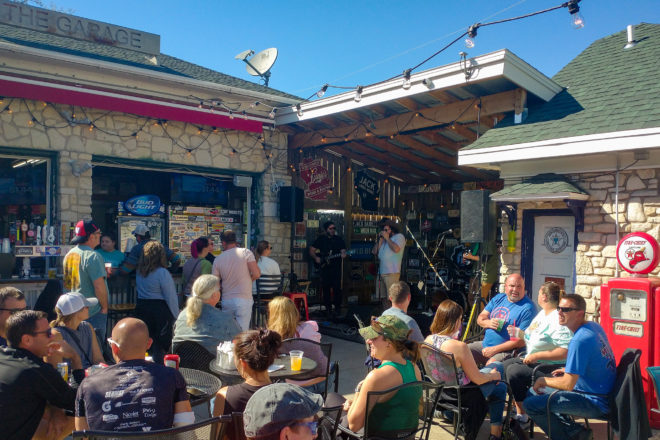 Music playing from the outdoor stage at the Garage at Husby’s in Sister Bay could be heard for several blocks down the street on Saturday afternoon this past weekend, drawing crowds to enjoy the Chicago-based rock and funk soul band Sneezy. After a long absence, the excitement and energy of live music had returned to the venue and the enthusiastic audience.

Sneezy’s featured songs followed themes of food and drink: Someone requested the original song “Sandwich,” which was a crowd favorite, followed shortly by a cover of Lizzo’s “Juice.” The band’s humorous, lighthearted tone and variety of music genres served as an upbeat beginning to the return of live music on a sunny afternoon.

As early as 2 pm, one had to weave through the crowd to get to the stage. Every table and chair were filled as bartenders hustled behind the counter to serve cold drinks, tacos and sliders. The standing crowd extended almost to the sidewalk.

The band’s front man fully embraced the beginning of summer – in bare feet, a bolo tie and a pale, tie-dyed shirt – as he shook a tambourine and danced on stage. Another band member played saxophone, adding vibrant color to the traditional rock-band instrumentation of guitars, drums and bass. The atmosphere was loud, but exciting after more than a year without the combination of dense crowds and live music.

As the afternoon went on, more people made their way to the front of the stage to dance and sing along to hits such as The Temptations’ “My Girl.” Sometimes Sneezy seamlessly blended unlikely songs together, such as beginning “The Joker” by Steve Miller, then transitioning to “Undone – The Sweater Song” by Weezer, before finishing the first song.

Sneezy’s appearance at the Garage at Husby’s precedes its upcoming summer tour. Check out its full schedule at sneezyband.com.