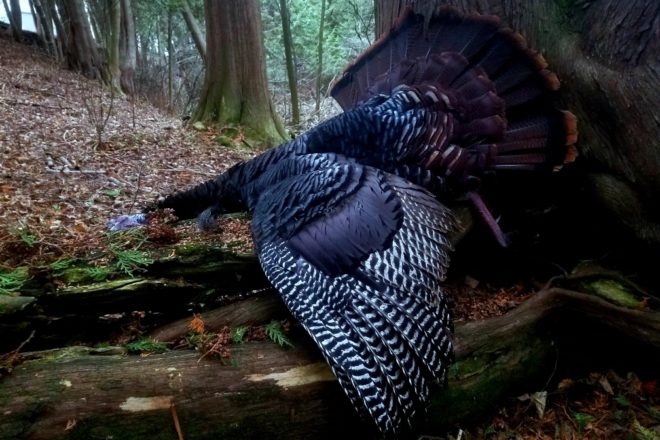 A number of hunting seasons are coming to an end this weekend, including the fall turkey hunt. This November gobbler provided a wild-game supper for six on Thanksgiving. Next up is the spring hunt. If you missed the deadline to apply for a tag, mark your calendar for March 17, when more than 17,000 leftovers for our area will go on sale at 10 am. Photo by Kevin Naze.

It’s a bit of a gamble trying to predict the weather a week out, but now that January’s here, snow and cold are inevitable at some point.

Temperatures are in the 40s, and rain is on the way as I write this in late December, yet it’s not hard to accept a forecast that shows a two-week stretch of unseasonably mild weather coming to an end. If the forecasters are correct, temperatures mainly in the teens and 20s with light snow during the next week should get winter sports moving in the right direction.

Yet even when the area fishing holes start to freeze over again, you’ll need to be patient. Check with local bait-and-tackle stores for the latest updates, and stay off the ice if you’re unsure of the conditions. Ongoing ice-breaking operations in Green Bay and any wind events can lead to dangerous conditions such as thin ice, open water and moving ice sheets that can strand offshore anglers.

During the coming week – if you go at all – stick to protected nearshore areas in bays, harbors and marinas.

Door County archers and crossbow users won’t get the same late deer-hunting opportunity that they had a year ago.

Jan. 5 is the final day to pursue whitetails in Door County and much of the state. There’s an exception for metro zones plus parts or all of counties that voted for an extended bow and crossbow season. In northeast Wisconsin, that list includes Kewaunee, Brown, Outagamie and southern Oconto counties.

Jan. 5 will also be the last day of the wild turkey, pheasant, Hungarian partridge and Zone A ruffed grouse hunts. The grouse hunt closure won’t show up in the printed regulations, however, because it’s being done under an emergency order.

A day earlier, on Jan. 4, an extended opportunity to hunt geese in the southern zone will end. This was the second straight year of a late hunt. Like the early goose season, it’s designed to target a growing population of locally born Canada geese.

If you missed the deadline to apply for a spring wild turkey hunting permit, fear not: 17,484 leftover tags are available for Zone 2 – part of more than 113,000 statewide.

Any remaining Zone 2 tags can be purchased again beginning March 21, also at 10 am, with a limit of one per day per hunter. The cost is $10 per resident and $15 per nonresident, plus a turkey hunting license and stamp privilege.

Very few hunters who applied failed to draw. The only way that happens is if a hunter wasn’t flexible enough in his or her choice of time periods during which to accept a permit.

The first regular hunting period is April 15-21, and the youth hunt will take place the previous weekend, April 12-13. See the rules at dnr.wi.gov/topic/hunt/documents/turkyouthhunt.pdf.

In addition, a number of Learn to Hunt wild turkey programs will take place in early April. To learn about organizing or participating in one, visit dnr.wi.gov/education/outdoorskills/lth.html.

Entries are being accepted through Feb. 1 for the DNR’s annual Great Waters photo contest and writing project. Top photos and writings will be included in the 2020-21 Wisconsin’s Great Waters calendar.

• The DNR’s first Free Fishing Weekend of 2019 is set for Jan. 18-19. No fishing licenses or stamps will be required, but all other regulations and bag limits will apply.

As of Dec. 27, Lake Michigan was 35 inches above its 100-year average, and 16 inches higher than last year at this time. Average levels were down an inch from the month prior and are expected to drop two more inches by the end of January. The lake’s water levels were 63 inches above the all-time December low, set in 2012, and two inches below the all-time high, set in 1986.