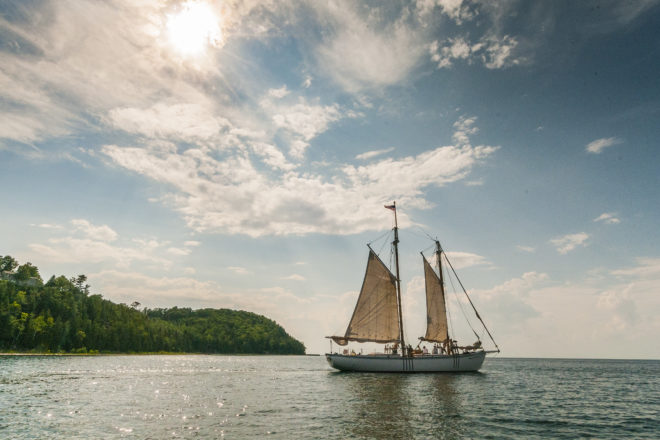 The Edith M. Becker sails off the shores of Sister Bay. Photo by Len Villano.

There are three bridges connecting the northern half of Door County to the rest of the country by land and there are three waterways that connect the peninsula’s shores to the sea. The St. Lawrence Seaway, Erie Canal and the Twain-esque Western Rivers have all provided passage from Door County to Florida and beyond for a different kind of snowbird.

Peder Nelson, owner of Sail Door County, stood in the shadow of the 65-foot schooner Edith M. Becker struggling with the engine as he recounted all of the other tribulations in its long and weathered sailing history.

“It’s a well storied and illustrated boat by now,” Nelson said, directing his crew of three on a sunny day in the Sister Bay marina. “It’s been around the world twice and I got it in a state of disrepair. We brought her home from Gloucester, Massachusetts, through the Erie Canal.”

For Nelson, the trips to the Caribbean and back were work.

“We had a summer where it just rained and I thought, I’m broke. We have to do something,” Nelson said. He brought the Edith M. Becker to the Virgin Islands hoping to start a sailing tour similar to the one he ran out of Sister Bay.

Meanwhile, Egg Harbor resident Ben Stephen sailed around the eastern half of the United States for play.

“You boat around here and you’re running the same water,” said Stephen, who has completed the Great Loop — a full circle from the Great Lakes around Florida and back. “For 13 months, I was running new water every day.”

Although Nelson and Stephen set out to open water for two different reasons, their separate travels through the same rivers, canals and salty water connect their stories. 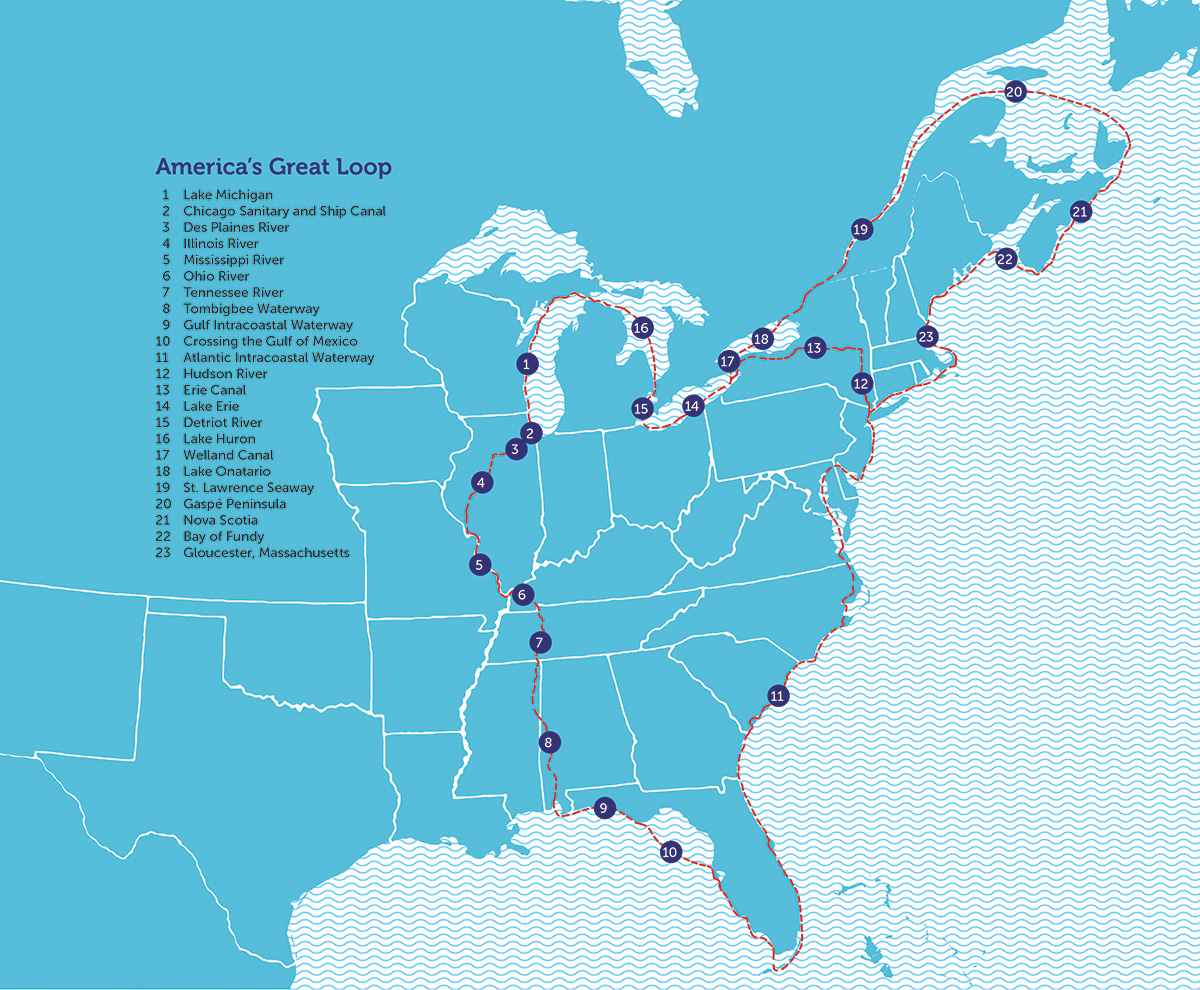 For Nelson, the journey through the St. Lawrence Seaway and down the eastern seaboard “was the best route I’ve ever taken but the most treacherous.”

The route starts along the Niagara Escarpment and through the Straits of Mackinac before careening down Lake Huron. The Detroit River spills out into Lake Erie and the Welland Canal on the eastern end of the shallow lake, which bypasses the 167-foot-high Niagara Falls.

Approaching true Seaway on the far east side of Lake Ontario, the Salties — massive tankers and freighters — begin passing by.

“It was awe-inspiring,” Nelson said, recalling the ships skirting through the seaway in what seemed like an arm’s reach, with the archipelagic Thousand Islands serving as the backdrop. Castles sit on top of the bluffs that form the watery ravine and the history of the canal stretches further back as the river runs east.

The St. Lawrence Seaway was the first and best entrance to inland North America for French explorers in the 1500s, when they could make it about as far as modern-day Montreal. The French settled along the river up until that point, but Americans opened up the entire Great Lakes system with the Erie Canal in 1825, and the influence of French culture on the seaway fades west of Montreal as the river reaches Lake Ontario. It wasn’t until the mid-1900s that the U.S. and Canadian governments cooperated, at the urging of our northern neighbor, to build a navigable waterway from Montreal into Lake Ontario, thus linking the Atlantic Ocean with the Great Lakes.

Just past Québec City, salt water meets with fresh water and the mouth of the river widens over the next 300 miles before dumping into the Gulf of St. Lawrence.

“Then it becomes tidal sailing,” Nelson said. “You watch the tides and you go out with the tides.”

Tidal sailing creates something of a hopscotch effect as boats bounce off the eastern shoreline and back to land with the tides as they head south; first around the northeast tip of Nova Scotia and then past its waterfront towns.

The notoriously treacherous Bay of Fundy then separates the Canadian portion of the journey from the American one.

For Nelson, the American leg of the journey had him seeking repairs up and down the eastern seaboard.

“We kept breaking down but that was a good way to get to know people and see some places,” Nelson said. As sailors pass New York City, they may find themselves meeting up with another seafaring snowbird that took another route through the American northeast:  the Erie Canal.

The 363-mile manmade water highway from Buffalo to Albany is considered one of the greatest public infrastructure projects ever undertaken by the United States.

Opened in 1825 after eight years of toiling through New York’s foothills, the canal was the first commercial connection from the Great Lakes region to the eastern shore of the United States. It also made New York City the premier urban center of the nation as every ship traveling from the Great Lakes and abroad would pass through. Several of New York’s most prominent cities lie within access of the canal: Albany, Syracuse, Rochester and Buffalo.

Today, commercial vessels opt for the St. Lawrence Seaway or Western Rivers routes and the Erie Canal is left to primarily recreational use.

Entering from the Niagara River north of Buffalo, it’s a straight shot east to Albany and then south to New York City. Although the journey is full of history and calm water, it’s a slow one for sailors. Low bridges force most boats to keep their masts down and use only a soft current and a sailboat’s motor to pass through.

From the shores of New England, more hopscotch brings boats down toward warmer weather. While some take to open water on their way south, others opt for the calmer waters of the Intracoastal Waterway, a 3,000-mile canal system along the shore protected by islands and waterfront highways.

Those who do take to the open water and are planning on making the Caribbean by winter head east to the 66° west meridian line for two reasons:  “Those trade [winds] will freshen up,” Nelson said, adding the other reason to hit that line is its passage through Bermuda. “If things go to pieces with your boat or the weather, Bermuda is a ditch point.”

The crystal blue water and paradise lifestyle is a long way away from the final route out of Door County by water.

“The towns were essentially dying,” Stephen said, recalling the passage through rural Tennessee and Alabama. “They were ghost towns. It was sad to see that portion where it was these neat old towns that were in decline.”

To get to those towns, the trip begins along the western shore of Lake Michigan before entering the pungent Chicago Sanitary Canal.

“If I did the trip again I’d use a respirator, it was so rank,” Nelson said.

The Chicago Sanitary Canal was the first massive encroachment on Lake Michigan’s waters. When it opened in 1900, its primary purpose was to carry the city’s waste to downstream neighbors using the flow of Lake Michigan’s fresh water. It helped with the city’s stench, but didn’t do much for the scent along the 28-mile canal.

The air freshens up once the canal dumps into the Des Plaines River before forming the Illinois. The Illinois River spits out into the Mississippi just north of St. Louis. After 200 miles on the frighteningly commercial Mississippi River, a short stint on the Ohio is cut off by the southward Tennessee River, where Stephen’s ghost towns make consistent appearances.

Stephen said the communities, having lost their industries to technology or the interstate system that bypassed them, embrace the boats as a new and welcome industry.

“The river system takes you out into these rural areas so you really got to see some views that you normally wouldn’t see on a boat,” Stephen said.

Those views include the entire landscape of middle America dressed up in fall colors.

“We were catching up with the migrating birds through the heartland of America,” Nelson said.

Catching up with the migrating birds takes boaters south with the Tennessee until the Pickwick Dam at the tri-state intersection of Tennessee, Mississippi and Alabama. The Tombigbee River slithers along the eastern side of Alabama before meeting with salt water at Mobile and the Gulf of Mexico.

Stephen and his acquired crew of six other Loopers (what those working to complete the Great Loop call themselves) made the 240-mile jump from Panama City, Florida, across the Gulf to Clearwater in about 24 hours. From there, a relaxing winter spent in Florida gave way to the spring and completion of the loop north and back through the Erie Canal.

“To be able to be on your boat for a year and be able to see the part of America by water is intriguing,” Stephen said.

“It’s really a lifestyle culture,” said Kim Russo, executive director of America’s Great Loop Cruisers’ Association. “They all have something in common, instant friendships form. It’s kind of like a family that is constantly crossing paths again and again.”

Nelson, who unknowingly ended up being a Looper himself, wonders aloud whether he would do the journey again as he fields a call to get the motor on the Edith M. Becker repaired.

It may take a rainy summer to send him south for work, but he sounds as though his next journey will be for a different purpose.

“It would have been a great travelogue,” he said, recalling those colorful people he met and smiling. “You know how travel is.”